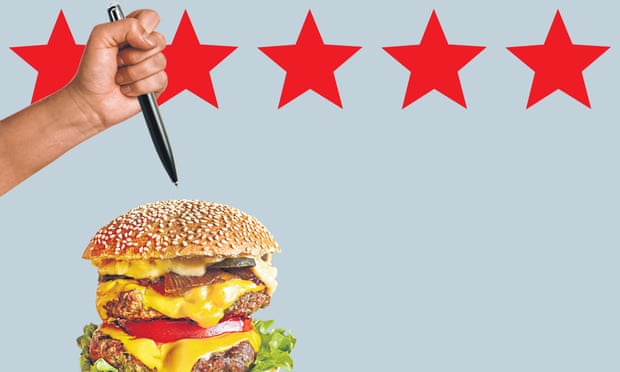 A US food critic has revealed how his power list of burgers led to the closure of the restaurant at No 1. It’s an experience his fellow critics can relate to

In a piece on the website Thrillist headlined: “I found the best burger place in America. And then I killed it,” Kevin Alexander last week made an unusual confession. Uncommonly extensive research (330 restaurants tested across 30 states over the course of 12 months) had led the award-winning food writer to compile, last year, a 100-strong power list of the best burgers in the US. Now he was reporting on how, within five months of publication, the mom-and-pop joint that made No 1 on that list – Stanich’s, in Portland, Oregon – had been forced to close, supposedly succumbing to the pressures that come from being overrun by burger tourists. It didn’t help that “personal problems” made rising to the challenge of the restaurant’s newfound popularity too difficult for Stanich’s proprietor. Alexander was feeling awful about it.

It’s a compelling narrative: a critic cast as the big bad wolf coming to huff and puff and blow your eatery down is the premise of many a cheesy food-themed drama. It’s Ratatouille’s Anton Ego demoting Gusteau’s by a star and the chef dying, broken-hearted, as a result. The idea that a critic might kill a restaurant with praise, though, is one to make you sit up straight. Really? Can accolades also be fatal in this business? Then again, do scathing comments, in real life, wield that amount of power? Can you ever claim straight causality between printed word and kitchen closure? I determined to find out.

The Observer’s Jay Rayner was three months into his job as a food critic when the power of his opinion was made clear to him. A French bistro in Brighton doing excellent things caught his attention. Yet, within a few weeks of him publishing an enthusiastic assessment, things at the restaurant started to fall apart. “I started hearing reports that it was nowhere near as good as I was claiming it was,” he says. “The story was that they’d been inundated with customers and they simply couldn’t cope.” This small business appeared to have been undone by his review. To his mind, though, a restaurant should be capable of running at full capacity at the quality at which he experienced it, regardless of how quiet it was on that particular night, because, as he puts it, why put all those tables in if you can’t?

If you have set up shop in New York, as the New Yorker’s food critic, Hannah Goldfield, says, a huge part of doing so is having the wherewithal to deal with sudden hype. It’s in your DNA to hope that one day you’ll have to. She might have introduced her readers to a diminutive Taiwanese tearoom in the West Village with the words: “I’m already regretting telling you about Té Company,” but she did it anyway. The food was simply too good – “phenomenally good” – not to. She follows them on Instagram and they are definitely still open. In this instance, she says, “I don’t think I’ve had any drastic influence”.

Goldfield, like all the critics I speak to, sees herself, on some level, as as much a service journalist as an entertainer. They don’t keep secrets. They don’t hold back. Of course, writing about the neighbourhood restaurant that tops every local’s list (as with, most recently, Via Carota in Manhattan) will make some people unhappy. “I’ve definitely had people, friends, colleagues needle me about ruining places,” she says. But her contention is that hype is short-lived. She mentions describing a restaurant recently, in a first draft, as having had “an impressively long-held stature as one of the best restaurants in the city”. When her editor pointed out that it had only been open for two years, she pushed back: two years was, to her mind, impressive in New York. Usually it’s a matter of months before you’re walking down the road and you pass a place, thinking: “Remember when it was impossible to get in?”

The other basic rule – the reverse of the too-good-to-withhold coin, if you will – is that if a place is bad but small, critics simply don’t write about it. As Rayner puts it: “What are you serving to the readers to say there’s a small restaurant in Leicester that’s shit. It’s not really of any value.” Negative criticism is only justified when the recipient’s size and stature warrant it – it’s part of a chain, it’s got hefty backing or overly lofty aspirations. One of the striking things, though, and the New York Times’s Pete Wells concurs, is that such massive businesses come with considerable marketing nous. The impact a review, however blood-thirsty, might have is minimal, if not an own goal.

Wells is routinely labeled the US’s most important dining critic and someone to whom one might reasonably ascribe the potential to do some damage. There was a time in 2012, just a year into his current role, that the website Eater described as “Pete the punisher’s reign of terror”. A New Yorker profile four years later said that he was “a vestige of newspaper clout”, from whom a single bad review, given the empires chefs now sit upon, could threaten a dozen restaurants and 1,000 employees.

And yet, the result of what is arguably one of the most famous culinary shootouts of all time – Wells’s all-questions review of Guy Fieri’s place on Time Square – was that it drummed up business. “He had a built-in audience,” Wells says. “They care about him more than they care about me. They’re Guy’s fans. So they’ll go. How much harm can I do?” Similarly, despite the fact that Rayner, in his own review-gone-viral – of Le Cinq in Paris, in 2017 – variously compared the food to breast implants, coin polish, stale air, a stale condom, nightmares, wounded flesh, the icky floor at a teenager’s party and garden waste, the restaurant is doing fine. “They’ve actually put their prices up,” he says.

When Fay Maschler, who has been in this business for 46 years at the Evening Standard, reviewed Dabbous for no other reason than it was within walking distance of where she lived and she had heard it had just opened, she knew the review had had a very positive effect because nobody could get a booking for months. “I heard Nigella couldn’t get in,” she says. Similarly, she suspects that Otto’s, the old-school fine dining destination no one had heard of until Simon Hopkinson and Maschler went for lunch, would have probably folded had she not reviewed it. “I like doing that,” she says. “I’ve done it a few times, to my knowledge.”

Maschler is careful, when she can be, not to base her review on one visit. “I’m able to go more than once,” she says, “which means a review is never a shot in the dark. I wouldn’t want to base any one review on only one visit. After all, we’re all prey to how we feel, whether we’re hungry or well or whether we like the person we’re with.” She realises that what she says can have an impact, although she is often none the wiser when it does, unless queues start forming.

For Wells, writing is a similarly unilateral endeavour – he has great clout, but he is not always aware of precisely what it changes. And knowing whatever effect his words might have certainly doesn’t influence what he chooses to say. “I generally just try to ride off into the sunset and never look over my shoulder,” he says. “You almost have to, to write what you need to write.” People have been posting images of queues out the door and down the block since his recent take on Manhattan’s Mama’s Too pizza, he says. “And I know from having been there before, there were very short lines, just a couple people ahead of you.” A pretty clear before and after.

The clearest before and after for Rayner comes by way of an unassuming pub at the top of a moor just outside Halifax, to which he trekked one Wednesday evening last May. There are probably more isolated restaurants in Britain, he says, but the Moorcock Inn at Sowerby Bridge is definitely remote. It was brilliant, he says. An idiosyncratic place doing its own, superlative thing. At the end of that visit, he sat co-owner Aimee Turford down. “It sounds very grand,” he says, “but I said: ‘I’m about to write a very positive review, and this is going to have an impact upon you. Please, please work out exactly how much trade you can take. Do not attempt to feed absolutely everybody who wants to come to your restaurant.’”

I call Turford after Sunday lunchtime service. “The words, ‘You need to prepare yourselves’,” she says, “I don’t think we comprehended at the time what that meant.”

Within six hours of publication, though, Rayner’s meaning had become abundantly clear: the restaurant had picked up 600 future guests. Six months on, a quiet midweek evening no longer means seven bookings with five cancellations. Until September, it was full every single lunch and dinner that it was open. It’s a new normal. But not one any critic could single-handedly take credit for. As Wells puts it, a good restaurateur knows that the best a review can do is to get customers in the door once. To get you to keep coming back to prop up the bar with your pint and your dog – to use Turford’s characterisation of the kind of customer she has nurtured – is a whole other kettle of fish.

By Dale Berning Sawa , this article was originally published at TheGuardian.com