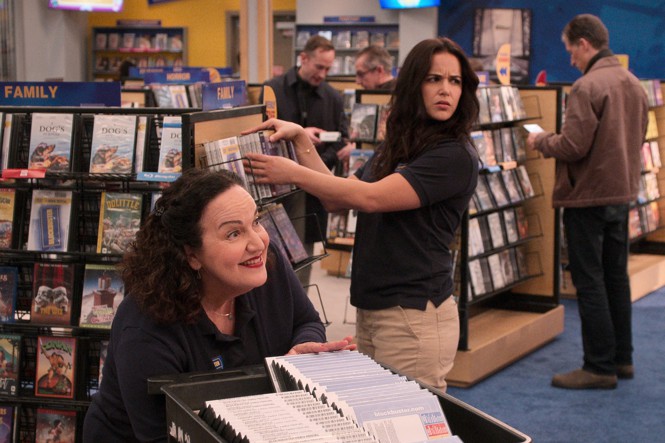 The last Blockbuster on Earth is located in Bend, Oregon, next to a Carl’s Jr. and a Chevron station. The store, in both practice and appearance, is quite similar to the 9,000 or so other Blockbusters that it has outlasted: It rents out movies. It features popcorn ceilings and fluorescent lights and the very particular corporate aesthetics of the American 1990s. It is stridently analog. Even so, it relies on the internet: The last Blockbuster doubles as a tourist attraction, which is to say that it doubles as a setting for selfies and TikToks and cheerful acts of commodified nostalgia. After posting, you can head to the store’s own gift shop, where the merch on offer includes fanny packs and onesies and T-shirts that read, winkily, BLOCKBUSTER AND CHILL.

Blockbuster has been, over the years, a success story and a cautionary tale, an awards show and a board game and a documentary. It is also, now, a sitcom. Blockbuster is a workplace comedy set at a lightly fictionalized version of that endling in Bend. (This “last Blockbuster” does its lasting from a strip mall in Michigan.) The show stars Randall Park as Timmy Yoon, a longtime Blockbuster employee who has made it his mission to keep the blue-and-yellow dinosaur alive. It streams, in a film-worthy twist, on Netflix.

Blockbuster is a classic ensemble sitcom, similar in spirit to Superstore, Abbott Elementary, Parks and Recreation, and other shows that find humor in the frenetic collisions of the workplace. The series is also, sometimes, bleak. Timmy and his employees work for a brand that is out of time, in every sense, and the sitcom reflects that precarity. It does that, in part, by taking the characters themselves out of time: Age, in this world, does not suggest forward movement. It doesn’t suggest much at all. The world’s last Blockbuster is staffed by young people who often act like adults and older people who often act like children—by people who are caught in a moment when the old bargains and timelines are fading away. These characters, like the anachronism where they spend their days, suggest the trappings of suspended animation. They try to move forward; their tape keeps rewinding.

Take Timmy. A thoroughly good guy, he thinks of himself as something of a father figure to his employees. The last Blockbuster is their livelihood, and Timmy’s efforts to save both are matters of practicality as much as sentimentality. Timmy is also a guardian, of sorts, for his own parents: The two regularly summon him to their retirement community to referee the latest round of the argument they’ve been having for 40 years. But Timmy—his diminutive name is revealing—is in other ways distinctly youthful. He causes a small crisis by getting into a rapidly escalating prank war with two teenagers. He is, despite all his efforts, barely holding the store together. He is not a father in a literal sense; he is a middle-aged man who is living a life of delayed adulthood.

Timmy is also single, in part because his heart lives in the past: He has a long-standing crush on Eliza (Melissa Fumero), his good friend who is also one of his employees. Eliza embodies a different version of arrested development: She married, and had a child with, the guy she began dating in high school, giving up a college education (at Harvard, she will be sure to mention)—and also, the show suggests, a young life lived on her own terms.

Nearly every character in Blockbuster exemplifies a version of this tension: adulthood and childhood, intersecting at awkward angles. That makes the show, like so many of its fellow workplace comedies, an apt reflection of its time. Blockbuster premieres at a moment of profound instability, a time of social upheaval and political crisis and financial uncertainty. In the churn, the old, blunt markers of adulthood—among them marriage and children and retirement at a humane age—are dissolving. So are the basic promises of youth and maturity. This generation of kids goes to school expecting not only pop quizzes but also active-shooter drills. Homeownership is shifting from an aspirational milestone to a fantastical one. The “security” in Social Security threatens to become a broken promise as well as a grim joke.

Blockbuster, despite and by way of its comedy, gives shape to those circumstances. Its characters teeter on a broken timeline. They vary widely in age but share an acute kind of agelessness. Hannah (Madeleine Arthur), who is Eliza’s co-worker and roughly the age of Eliza’s daughter, is at once naive and miserly, immature and wise. Kayla (Kamaia Fairburn), another young employee, is often moody in the manner of a stereotypical teenager; she also runs a side business from Blockbuster’s check-out counter and tries to lease an apartment of her own.

Meanwhile, the middle-aged Connie (played, with veteran-of-the-stage flair, by Olga Merediz) is the store’s oldest employee; she giggles and dances and gets extremely excited about putting together a vaguely Lego-like promotional display. (After the death of her best friend, Connie befriends someone new—and then begins to panic. It’s been days since Patrice has called; Connie figures they must somehow be in a fight. But neither woman Mean Girl–ed the other: Each had simply forgotten who had placed the last phone call and had been too proud to call the other out of turn.) Percy, played by J. B. Smoove, is a similar blend of maturity and immaturity: He is a deeply caring father who also recently brought a coyote home as a pet. (He named it Chris.) Percy works not at the Blockbuster but around it: He owns a party store—named, delightfully, Party! Parti! Parté!—located in the same strip mall. Percy also owns the space that Blockbuster leases. He is Timmy’s landlord and good friend. He is also Kayla’s father.

Sitcoms thrive on confinement; their situations, and their comedies, come when different kinds of people are made to navigate the same small space. Blockbuster adopts that formula but also adapts it; through Percy, in particular, Blockbuster becomes not just a workplace comedy but also a family comedy and a buddy comedy. Percy’s centrality to so many of the show’s characters suggests the stakes of all the closeness. Timmy and Percy, both struggling to keep their businesses afloat, sometimes clash over Timmy’s rent payments. Timmy realizes that he might need to lay off an employee. Kayla has just told him that she dislikes the job. The solution that makes the most sense—to let Kayla go—is one that her dad will not abide. Timmy, like a young person, lives at the mercy of other people’s decisions. Like an older person, he is aware that he is running out of time.

In that, Timmy is reminiscent of characters such as Leslie on Parks and Recreation and Michael on The Office; considering his colleagues to be his family, he strives to keep their jobs relevant. Timmy is also, in his young-at-heart intensity, reminiscent of Creed on The Office and Tom on Parks and Recreation and Ava on Abbott Elementary—characters who succeed as characters partly because, in one way or another, they refuse to act their age. (Ava spends her days shooting TikToks, primping, flirting, and generally sowing chaos. She is also Abbott’s principal.) But while the other characters’ agelessness tends to serve as comic relief, Timmy’s version is notably fraught. When his colleagues do the most basic things sitcom denizens will do—bump into one another, awkwardly and repeatedly—the collisions often cause him not amusement but panic. Again and again, the show’s protagonist finds himself trapped—by his friendships, by his finances, by his decision to steward an obsolete brand. Everything, for Timmy, comes down to the last Blockbuster on Earth: his good friend, his love interest, his livelihood, his sense of self. And the last Blockbuster on Earth is in constant danger of dying off.

[Read: And the meek shall inherit Pawnee]

That sense of high-stakes uncertainty saturates nearly every scene in this otherwise low-stakes show. Trying to pivot the business from movie rentals to community building, Timmy hires a former child star to headline an event at the store. “Lil’ Stevie” became famous for his role in the film But I’m Too Young to Be Santa! and is, yes, now a middle-aged man. But he is still a kid: He spends the event drunkenly hitting on female attendees, mumbling inappropriate comments to children, and making a mockery of Timmy’s latest attempt to save the store. The disaster that results might have been played merely for laughs on another show. On Blockbuster, it is also a crushing setback: Timmy bets everything on that event working out. Because of a once-famous man-child, it doesn’t. The situational problem is, for Timmy and his employees, also an existential one.

Blockbuster, the brand, still has a website. Its single page features the Blockbuster logo, a torn movie ticket set in blue before a yellow haze, accompanied by a caption: WE ARE WORKING ON REWINDING YOUR MOVIE. The sitcom, in its way, is working on the same thing. Blockbuster is comedy infused with loss, as a fact and as a looming threat. It is a show fit for a moment shaped by regressions—a time that has brought the dismantling of hard-won social progress; that finds leaders acting like children and young people stepping in to fill the void; that finds many Americans caught between a precarious present and an unsteady future. Timmy’s Blockbuster is hanging on, for now. But tomorrow, in his world as in ours, is another story.