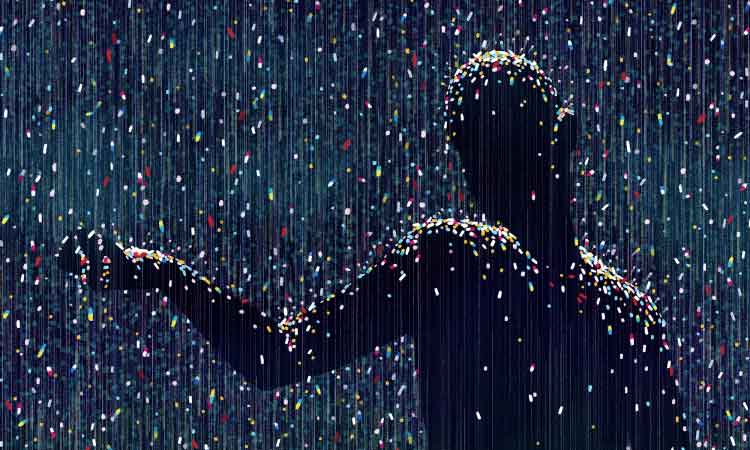 Travis Rieder’s journey down the rabbit hole of opioid dependence began with his motorcycle accident in 2015. Enduring half a dozen surgeries, drugs were miraculous and essential to his recovery. But his most profound suffering came several months later when he went into acute opioid withdrawal while following physician’s orders. After a painful struggle, Rieder finally succeeded in weaning himself, and he vividly describes his experience in his TED Talk. Below, he explores one of the cultural challenges that we must overcome if we are to address the problem.

The very frame we have for pain is part of what is driving the ineffective solutions that have emerged in response to the opioid crisis. Too many of us, too often, think of pain as something that needs to be eliminated, and so we focus on pain intensity, with the goal of no pain. This is precisely how we traditionally use that ubiquitous 0 – 10 scale: “Oh, you have pain? Okay, how intense? Let’s see if we can get that number down.” And the patient thinks, “Yeah, down to zero.”

A pain-free life, though, is not an appropriate goal. As military anesthesiologist Chester “Trip” Buckenmaier III told me, “I can get anyone’s pain to zero. It’s just that you’ll be lying on the floor, slobbering all over the carpet.” I immediately thought of my time in the hospital, where I essentially did that. Not that I blame myself for seeking serious pain relief immediately after trauma, but thinking only of intensity would drive me to beg for unconsciousness. If I had tried to take that reasoning and move forward into recovery, the goal of pain reduction would have been incompatible with living.

Our obsession with a unidimensional pain scale and a medicine that can get us to zero — but with serious costs — has been a recipe for disaster.

In an effort to incorporate this insight, the team at the Defense and Veterans Center for Integrative Pain Medicine in Maryland has released a new pain scale. This revised scale is to be used with a list of questions, and together they link the intensity of pain to four considerations: activity, stress, mood and sleep. Each of these considerations is ranked, and the overall pain rating reflects the intensity of the pain and its effect on one’s life. Rating one’s pain, then, is much more than an exercise in trying to subjectively evaluate how bad it feels — it’s about judging how the pain affects overall quality of life.

This scale represents, for me, an important step in moving away from opioid-centric pain care. Our obsession with a unidimensional pain scale and a medicine that can get us to zero — but with serious costs — has been a recipe for disaster. What the revising also points out is the role that each of us can play in solving some of the overwhelmingly large and complex problems connected to opioid misuse. Each of us can question the views we hold that have allowed our healthcare system to develop.

During the summer of 2017, my friend Colin Hickey needed to undergo surgery — two, in fact. He had torn the labrum of each hip (a cartilage ring around the socket), due to a combination of a very active lifestyle and a structural deformity. The surgeon planned to operate on one side first and then do the other a couple of months later.

This procedure can appear to be a fairly minor one. It’s minimally invasive, and the surgeon does the work with very small incisions. Once inside, however, he needs to repair the torn cartilage and carve down some excess bone to prevent the friction that caused the tear. This is why people who undergo this surgery have months of physical therapy and recovery, after weeks of extremely limited mobility.

My friend Colin looked pained but also completely alert. I asked about his pain and meds. “Yeah, they gave me a bottle of pills, but I don’t want ’em,” he replied.

After his first surgery, I visited Colin at his apartment, and we swapped war stories of our injuries, surgeries and recoveries. He was in pretty rough shape and confined to his bed most of the day. He looked pained but also completely alert. I asked about his pain and meds.

Familiar with my struggle with painkillers, he looked at me sympathetically. He said, “Obviously I know the risks; but I also just don’t think I need them. It hurts, and it’ll hurt for a while. But the first days were the worst, and I made it through. So I don’t think they’re necessary.”

Colin is one of the most focused, thoughtful, straight-up toughest people I know, and I was impressed.

“And how many pills did they prescribe? Of what?”

“Uhhh, I think it’s like 60, probably Percocet. They’re right there on the table,” he gestured.

Part of why Colin was able to make it through without pills was because he doesn’t expect life to be pain-free.

He was right: 60 pills of 5mg oxycodone/325mg acetaminophen, and not a one missing. We chatted about his reasons, which seemed to come down largely to his personal philosophy. Colin is a Colorado hippie who’s been a complete minimalist as long as I’ve known him. He also isn’t a huge fan of medicine. And while he would have, I think, taken the pills if he really thought he needed them, he just wasn’t afraid of some pain. He was willing to be uncomfortable and work hard.

Nothing about my admiration for Colin should indicate that all torn labrum surgeries should be performed without prescribing opioids for recovery. But what I love about his story is that it highlights the degree to which some pain can simply be dealt with and that our expectations can really affect what we do and how we feel. Part of why Colin was able to make it through is because he doesn’t expect life to be pain-free.

As I was thinking about Colin, I ended up chatting with my mom on the phone, and we were discussing her recent knee replacement surgery. I told her how impressed I was by her recovery and how little medication she’d taken. She told me something I hadn’t expected: “Well, you told me it was going to hurt — that it was really going to suck. And I knew that I didn’t want to be on the meds for too long. So I went into it expecting for it to be pretty terrible. I was ready, I guess. And I knew it wouldn’t last forever.”

Watching these two people that I deeply care about come to understand pain and medication differently has been very moving. In my case, trauma caught me by surprise, and when I found myself in hospitals for weeks, on morphine and fentanyl drips, popping oxycodone, I wasn’t prepared at all. I had one goal: Avoid the pain. Only in retrospect can I realize that I carried that goal much too far forward into my recovery.

In many places around the world, but especially in the US, we live in a “pill for every pain” culture. You have a headache? There’s a pill for that. Sprained your ankle? Pill for that. OTC makers already capitalize on this culture, so it’s no surprise that the manufacturers of prescription medications jumped on board as well.

We can be part of an important culture change. We can stop demanding from our doctors a pill for every pain.

But not all treatments for pain involve a pill (or a medical procedure). A surprising amount of scientific data supports what we might think of as “lifestyle” therapies or self-care. Exercise, yoga and massage have all been shown to be beneficial for dealing with pain. Additionally, cognitive-behavioral therapy (CBT) has been shown to be effective for treating certain forms of chronic pain. Despite the evidence, many people find such a suggestion offensive. If a physician recommends CBT to a chronic pain patient, the response may well be: “What? So you think this is all in my head? You think my pain isn’t real?”

That pain can be treated with CBT implies nothing of the sort. Chronic pain is often what’s called “maladaptive pain,” which means it no longer signals tissue damage or injury. Whereas acute pain serves to alert us that our body is at risk, that same pain can transition into chronic pain that no longer serves that function. The evidence that CBT can treat chronic pain suggests that therapy can help the brain and nervous system to correct this dysfunction. By pursuing psychological health, one can simultaneously promote pain relief.

Acupuncture has also been shown to be effective in treating chronic pain. Although it’s totally unclear (to modern Western medicine) why it helps — that is to say, the precise mechanism of pain relief is a bit mysterious — the evidence suggests that it works. Indeed, some suggests it can work as well as pharmacotherapy for some pain and the results are lasting.

Research is being conducted into all sorts of lifestyle interventions, ranging from mindfulness meditation to qigong and tai chi. None of these are a magic bullet, but they can genuinely help. Of course, pursuing a lifestyle change can be hard, expensive and likely impossible for some people. Whereas pills are relatively cheap, the kind of changes I’m discussing here are not.

I am most certainly not recommending that we all just get up after an injury or surgery and “rub some dirt in it.” Some pain is devastating and life-limiting, and sometimes that pain responds well to opioids. But we can be part of an important culture change. We can stop demanding from our doctors a pill for every pain, and we can try to take seriously the non-medication treatments they suggest. We can talk to our doctors, like Colin did. And by formulating an attitude and a set of expectations that makes it easier for them to use those powerful tools responsibly, each one of us can make a difference.

Excerpted with permission from the new book In Pain: A Bioethicist’s Personal Struggle with Opioids by Travis Rieder. Published by Harper, an imprint of HarperCollins Publishers. Copyright © 2019 by Travis Rieder.

This article was originally published at Ideas.Ted.com

Next post Learning to fly: how a hospital stay helped Nnedi Okorafor find herself as a writer
Close
Menu
Social profiles