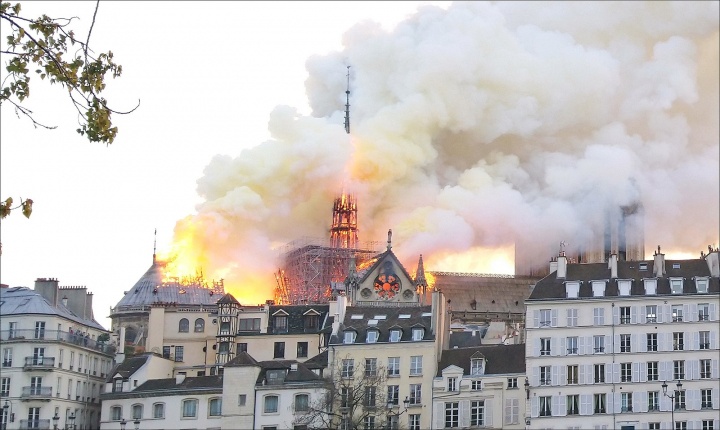 A painful byproduct of the livestream age is the drastic expansion of helpless witnesses. This past April, people around the world looked transfixed at their computer and phone screens, unable to do anything, as Notre-Dame de Paris burned. In front of the cathedral, some people’s grief took traditional forms. They knelt down on the cobblestones and sang “Ave Maria.” Others opted for more contemporary testimony: smartphones out, recording. For cyber-spectators experiencing it all from afar, Twitter, Snapchat, Instagram, and Facebook became the natural public squares. So came the selfies:

Jesus! My mom and I took this selfie a couple months ago and to hear that it’s burning just breaks my heart. OMG PARIS is literally burning and it’s no joke. How sad! PLEASE PRAY FOR THE FIRE TO STOP. #NotreDame #notredamedeparis #Paris #France

I first visited Notre Dame in 2003 – my first time abroad – and 10 years ago is when I last made it back to Paris. My heart breaks for the beauty and history lost

Selfie of my wife and me at #NotreDame less than a year ago. Amazing place. Heartbreaking news. Feels a bit like civilization itself is on fire. @pearlygirly pic.twitter.com/lCHKcCptVv

And then came the outrage:

we get it, you’ve all been to Paris, we don’t need your abroad glamour shots to prove it

Amazing how many of my facebook friends are taking this moment of tragedy in Paris to #humblebrag about their trip to #NotreDame.

Every online user is always contributing to the massive archive that is the internet. In moments of collective loss, posters become amateur archivists, self-aware in their practice, providing proof of our pain and sharing it with the masses. Mourning has historically inspired documentation for catharsis, but the advent of the camera granted a facticity to history that previous mediums could never offer. As Susan Sontag once wrote, “Something becomes real — to those who are elsewhere, following it as ‘news’ — by being photographed.” What better way to testify to the cruel senselessness of loss than through such representations of our encounters with what’s been lost?

A swipe down the average Instagram feed demonstrates how Sontag’s terms of photography, as well as “news,” have shifted since she wrote Regarding the Pain of Others in 2003. Some critics have considered this indicative of the supposed increasing superficiality of contemporary culture. For instance, there’s Kenneth Goldsmith’s description of a phenomenon he saw at MoMA:

Instead of reverently standing there in front of [Picasso’s Les Demoiselles d’Avignon], scads of visitors were turning their backs on the painting, snapping selfies, and uploading them to social media. I noticed that more visitors were paying attention to their devices than to the artwork on the walls. In every gallery, benches intended for the quiet contemplation of modernist masterpieces were co-opted by smartphone users hunched over their devices.

Vapid and narcissistic? Or providing the same photographic proof of significant experience Sontag outlines, but mapped onto the everyday? In The Selfie Generation, Alicia Eler writes: “a selfie makes clear how someone sees themselves in that moment, then gives them the option of whether or not to share.” The smartphone-wielding social media user has been primed to capture communion with iconic objects, from Picasso paintings to Gothic cathedrals. The reverence such objects were once given which Goldsmith references has been extroverted with the clicking of the “Share” button, a new signification.

The contemporary tourist selfie is thus a new, free variety of souvenir (disregarding, of course, the costs of travel, accommodation, meals, and one’s smartphone). It’s certainly easier to share with friends than a suitcase full of tchotchkes. The tourist photograph has been around since the 19th century, when technological developments expanded both luxury travel and photographic modalities. From exotic postcards to slide projectors and Super 8 films, photographic self-inscription has long been an integral part of tourism. Much-maligned tools like the selfie stick, Snapchat filters, and GoPro are just the latest developments in this realm.

Notre-Dame, beyond its religious significance, embodies a certain starry-eyed romanticism of the international vision of Paris. It’s thought of in the same daydreams as languid meals, chain-smoking, and walks along the Seine. As demonstrated by many Americans in their Twitter eulogies following the fire, Notre-Dame represented cherished memories from the past, or the possibility of leisure or means to afford global travel.

I took this when I was in Paris two years ago. I was still getting used to my camera, but Notre Dame Cathedral was one of the first places I photographed when I arrived. (And one of the many reason I fell in love with the city.) Sad to see it burning now. #NotreDame pic.twitter.com/nyxSH7KdYS

For two years, this was my Twitter banner and one of my most beloved memories. Absolutely devastated today. #NotreDame #Travel #nationaltreasure #irreplacable #Writingcommunity pic.twitter.com/FYQiA3Xt0R

The perceived superficiality of the selfie-taking tourist is vindicated when destruction renders their posts as relics, as evidence. In his essay “Why Social Media Turns to Images to Help us Cope with Tragedy,” Kyle Chayka presents his notion of the “grief meme,” whereby social media users change their profile pictures or repost icons as a means of demonstrating solidarity after a collective traumatic event. “We turn to grief memes when words fail our feelings, when we are yearning to address something that no writing of our own can quite embody, but we want to share it anyway.”

I’d argue that the inarticulate feeling motivating the wave of commemorative travel selfies about Notre-Dame is not mourning for the cathedral itself, the popular ideation of Paris, or a longing for international travel generally (though all could be contributing factors). Rather, it’s people reckoning with the existential fears such events force us to contemplate. Even our most iconic monuments are fragile and will crumble.

In a moment when iconography dominates discourse (as ongoing debates over Confederate memorials in America demonstrate), internet users understand well the potency of monuments as symbols. It makes sense that grappling with the fragility of such symbols should hurt us so personally. No wonder we resort to the internet, the one immortal thing we have created, to stockpile our imperfect, pixelated signifiers of what we have lost.