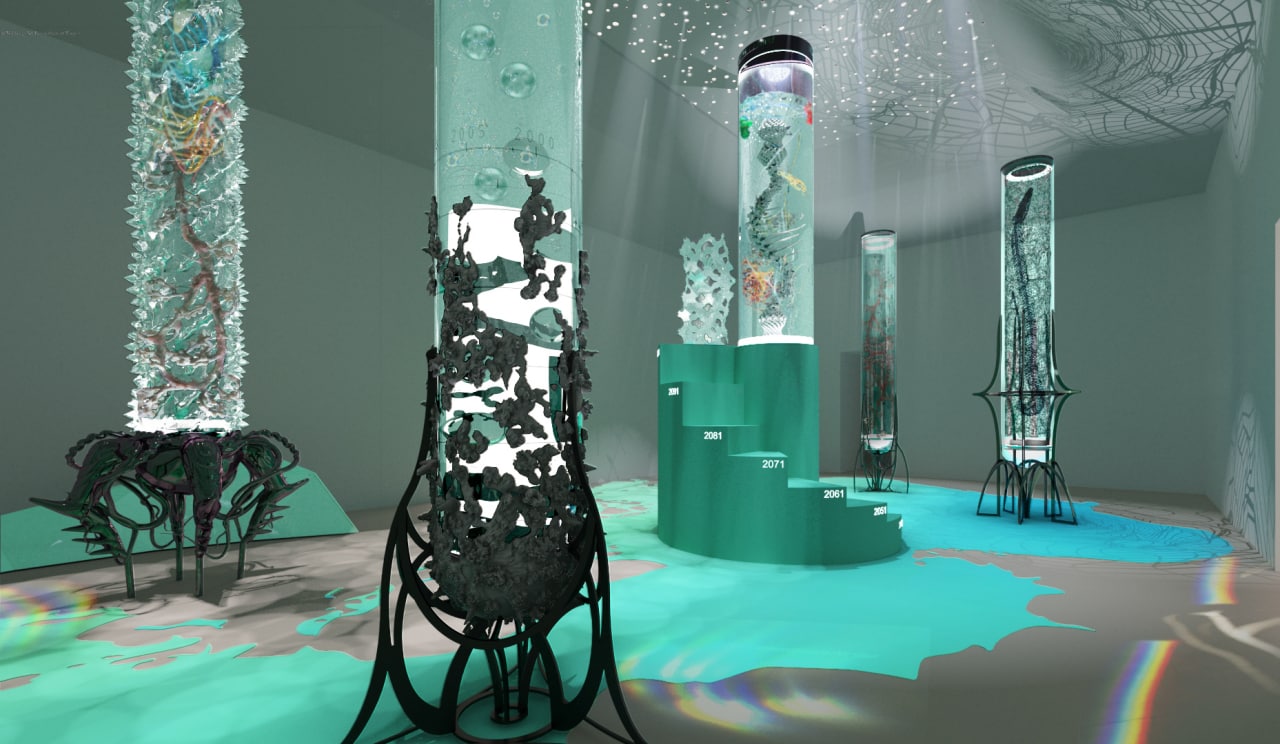 Nebula, after Williamina Fleming, 2016, Lia Halloran. From a series tracing overlooked contributions of women in astronomy since antiquity, this work references the contributions of Williamina Patton Stevens Fleming, who is credited with discovering the Horsehead Nebula in 1888. Part of a PST research project being undertaken at The Huntington. Cyanotype print from painted negative on paper, 76 x 76 in. Courtesy of the artist and Luis de Jesus Los Angeles © Lia Halloran, 2016
For Clifford V. Johnson, there’s a powerful instrument that’s often missed when we talk about science: art.


The professor of physics and astronomy at the University of Southern California researches the nature of space and time, including topics like quantum gravity and black holes. But he’s also interested in broadening the cultural understanding of science. He works with artists, filmmakers, and other storytellers to incorporate science into their work. He also published a graphic novel that uses art to illustrate conversations about scientific topics.

“Science and art are partners in how I engage with the world,” Johnson said at a recent launch event for Pacific Standard Time, a series of collaborations among cultural organizations across Southern California that will return in 2024. “I feel like a more complete individual in the universe when I’m using both fields in order to study the cosmos and express myself in it.”

Fueled by Getty Foundation grants, 45 local organizations are participating in PST, which is guided by the theme Art and Science. These organizations are currently researching some of the most complex challenges of the 21st century—from climate change and environmental racism to the current pandemic and artificial intelligence—and the creative solutions these problems demand.

Below, we highlight a few of the upcoming projects and provide a sneak peek at the ways local artists and scientists plan to collaborate on their research.

An interdisciplinary approach may be what’s needed to solve the complex challenges facing the 21st-century world.

“When people we may define as artists, scientists or some other form of activist are represented in the same room, there’s an opportunity to see the interconnectedness of their ideas,” said Cameron Shaw, deputy director and chief curator at the California African American Museum (CAAM). “And perhaps,” she added, “new solutions for the future.”

CAAM is focusing its PST research and exhibition on agricultural scientist George Washington Carver, who tackled issues of his day from both an artistic and scientific point of view. Named “the Black Leonardo” by Time magazine in 1941, Carver studied crop rotations, patented medicinal uses for peanuts, and designed the Jesup Wagon that served as a mobile classroom to teach farmers revolutionary agricultural practices to achieve higher crop yields and healthier soil. Carver was also a dedicated artist who invented his own pigments and practiced needlework, painting, and drawing.

“Many of the ideas that are now gaining wide public attention, like plant-based engineering and the powerful role of mycelium, the importance of sustainable agriculture practices and organic farming—Carver was beginning to think about and advocate for all of these things,” Shaw said. “We’re seeing these ideas now be considered cutting-edge ideas and the ways they could be reshaping the world.”

Valuing the Earth and Indigenous Knowledge

Native communities weave a deep understanding of the natural world into artistic practice, and offer valuable insights into challenges like climate change and environmental justice.

“Anything in the world, at its origin, came from the native Indigenous technology and science, because that’s where the origin of human beings came from. I think with this fast-moving world, Indigenous knowledge and wisdom are not valued anymore,” said textile artist Porfirio Gutierrez. “What I would like to see is for the world to be able to recognize and still find values within the traditional.”

For Gutierrez, who uses Zapotec techniques and materials in his work, the work of the artist and the scientist are interconnected. “My heart does not separate one from another,” he said. Knowledge about which plants to use for various dyes, and the techniques required to hand-weave his textiles, were passed down through generations. These processes contain a respect for the land and sustainability; these values are now necessary in the fight against climate change and the depletion of the earth’s natural resources.

Gutierrez will collaborate with the Atkinson Gallery at Santa Barbara City College on the PST project Cosmovisión Indígena, which will trace the history, science, and contemporary uses of Mesoamerican dye-making and weaving processes, while exploring the mythology, ritual, and storytelling used to preserve and pass on this technology.

As a literary and artistic genre, science fiction is particularly intriguing because it acknowledges that there is not always a clean line between art and science, said Alexis Bard Johnson, curator at ONE Archives at the University of Southern California Libraries.

ONE Archives, one of the largest archive of LGBTQ materials in the world, will explore how people who were building Queer community and fighting for civil rights found inspiration and camaraderie under the umbrella of science fiction and its inventive visual forms in the PST exhibition Sexual Science and the Imagi-nation.

“This progression of an idea moving from entirely fantastical, to rationally imagined, to concrete is an essential component of science fiction and helps explain its importance to communities that exist or wish to exist outside mainstream or societal norms,” Johnson said.

From zines and costumes to fantastical paintings and drawings, there are hidden harmonies between early LGBTQ activism in Los Angeles and science fiction fandom in the United States.

“While this exhibition is focused on a period in the past,” Johnson said, “it is our hope that exploring this moment in history and its various connections will inform our current ideas and reframe our perspective on Queer identity both now and over time.”

Building Teams to Explore the Oceans

Oceanographic Art and Science: Navigating the Pacific is a project of the UC San Diego Institute of Arts and Humanities and the Birch Aquarium. It will focus on the collaborative mission of the Scripps Institute of Oceanography to understand and protect the planet. By bringing together diverse teams of artists, scientists, and writers, the project will research the ways that oceanographers and seafaring Pacific Islanders have engaged in artistic practice to design maps, vessels, and instruments to sound and image the ocean, and to intervene in legacies of scientific imperialism in the Pacific.

“Projects co-produced by artists and scientists help us to move off of the idea that great work is the product of individual genius,” said Lisa Cartwright, professor of visual art, communication and science studies at UC San Diego and lead researcher for the PST project. “Work that truly changes how we think, that helps us to imagine our way forward through crisis, is always more collaborative, more interdisciplinary, and more dependent on community engagement than we probably realize.”

“We’re trying to create new ways of going forward where the input is not about calling on an expert for consultation or skill, but getting that expert involved so multiple kinds of expertise make a new kind of practice,” Cartwright said. “Art can incorporate materials and questions that are probably a bigger contributor to knowledge and experience and change than we realized before.”

At the Center for Land Use Interpretation (CLUI), researchers study the various ways humans interact with the surface of the earth; for example, through agriculture, habitation, and recreation. They also see the potential for art to help tell stories about how the man-made landscape reflects our culture and economy. Artists bring new ways of seeing and understanding to concepts that may seem overwhelmingly technical, said Aurora Tang, CLUI program manager and curator of CLUI’s PST project Remote Sensing: Explorations into the Art of Detection.

“Artists can be really effective at expanding conversations and concepts. I think some of the strongest artists and artworks do just that—open up and ask questions,” Tang said. “They are expansive rather than reductive.”

For Remote Sensing, artists will create projects that explore detection technology—technology that gathers information and images without contact between the observer and observed. You can find this type of technology in industries such as the aerospace industry, the military, and photography, film, and other media.

Topics such as aerial imaging, electronic warfare, and stealth surveillance will be interpreted and displayed in two ways: through interactive digital and print displays at CLUI’s exhibition space in Culver City, and through temporary installations and other contemporary art projects set in the landscape itself, including at CLUI’s Desert Research Station located in the Mojave desert about 130 miles from downtown Los Angeles.

Deborah Stratman and Steve Badgett, Range Trumpet, at the CLUI Desert Research Station, near Hinkley, California. Photo courtesy of the Center for Land Use Interpretation

Artistic gestures as seemingly simple as pointing, marking, or framing can cause a significant shift in perception, transforming landscapes into compelling, dramatic, and aesthetic places, said Tang. In the Range Trumpet sculpture pictured above, two “listening horns” are inspired by pre-radar sound surveillance technology developed to detect incoming enemy aircraft and can be manipulated by observers to track moving objects on land and in the sky above.

Tang hopes experiences like these will help visitors come away with a heightened sense of curiosity and interest in the physical landscapes. “The strongest artwork can provide a perspectival shift, changing the way we look at and understand our surroundings,” Tang said. 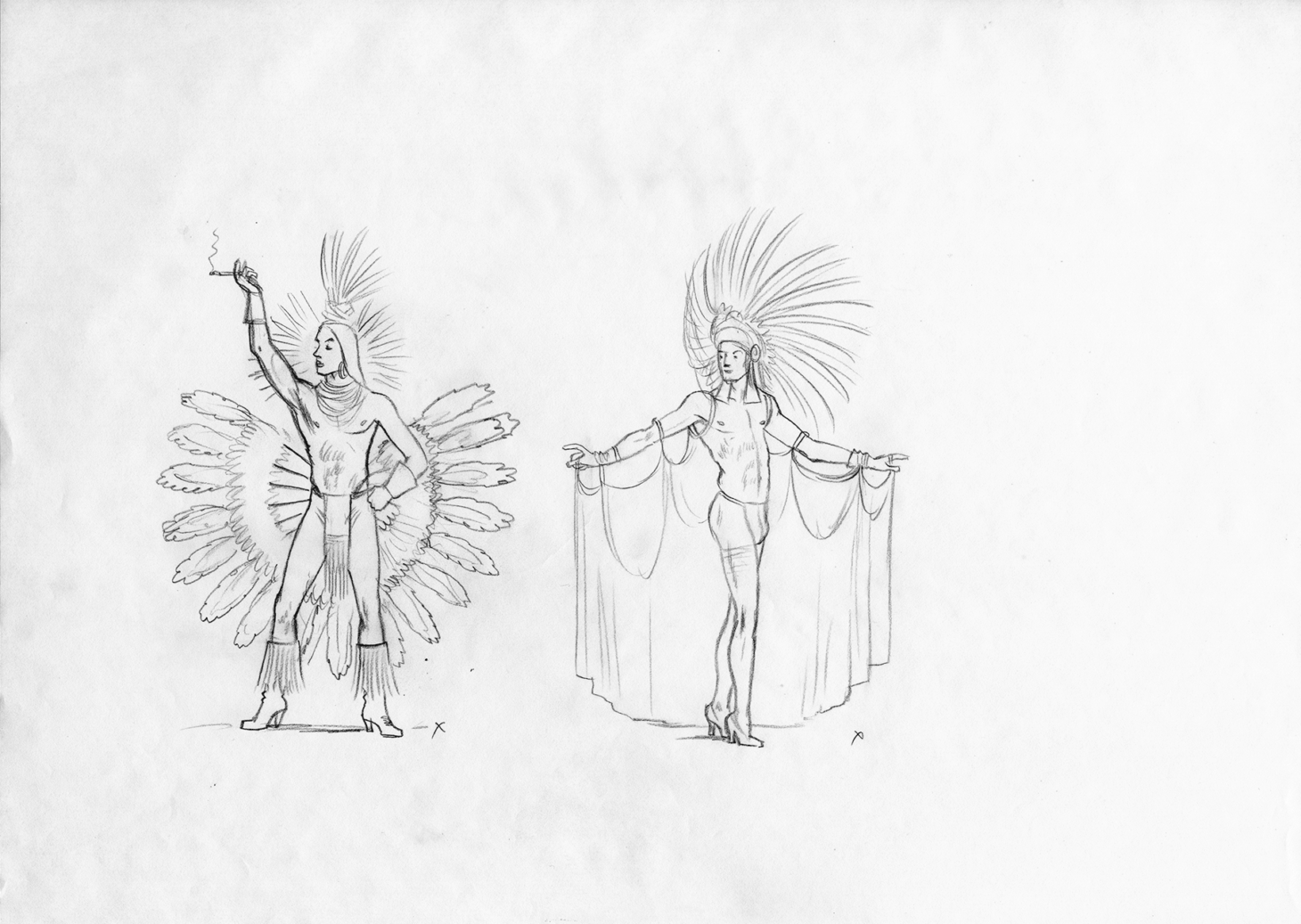 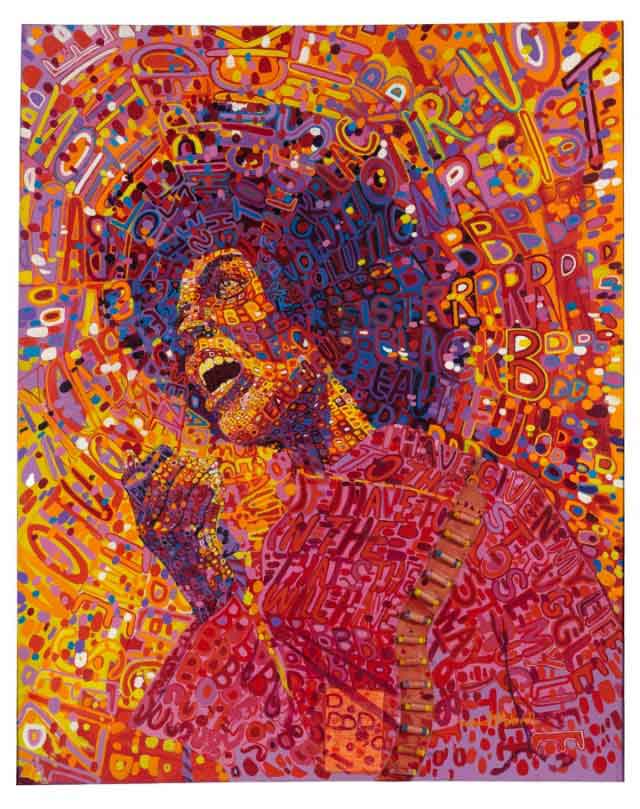 Art
A Big Party Kicks off Brooklyn Museum’s Soul of a Nation: Art in the Age of Black Power 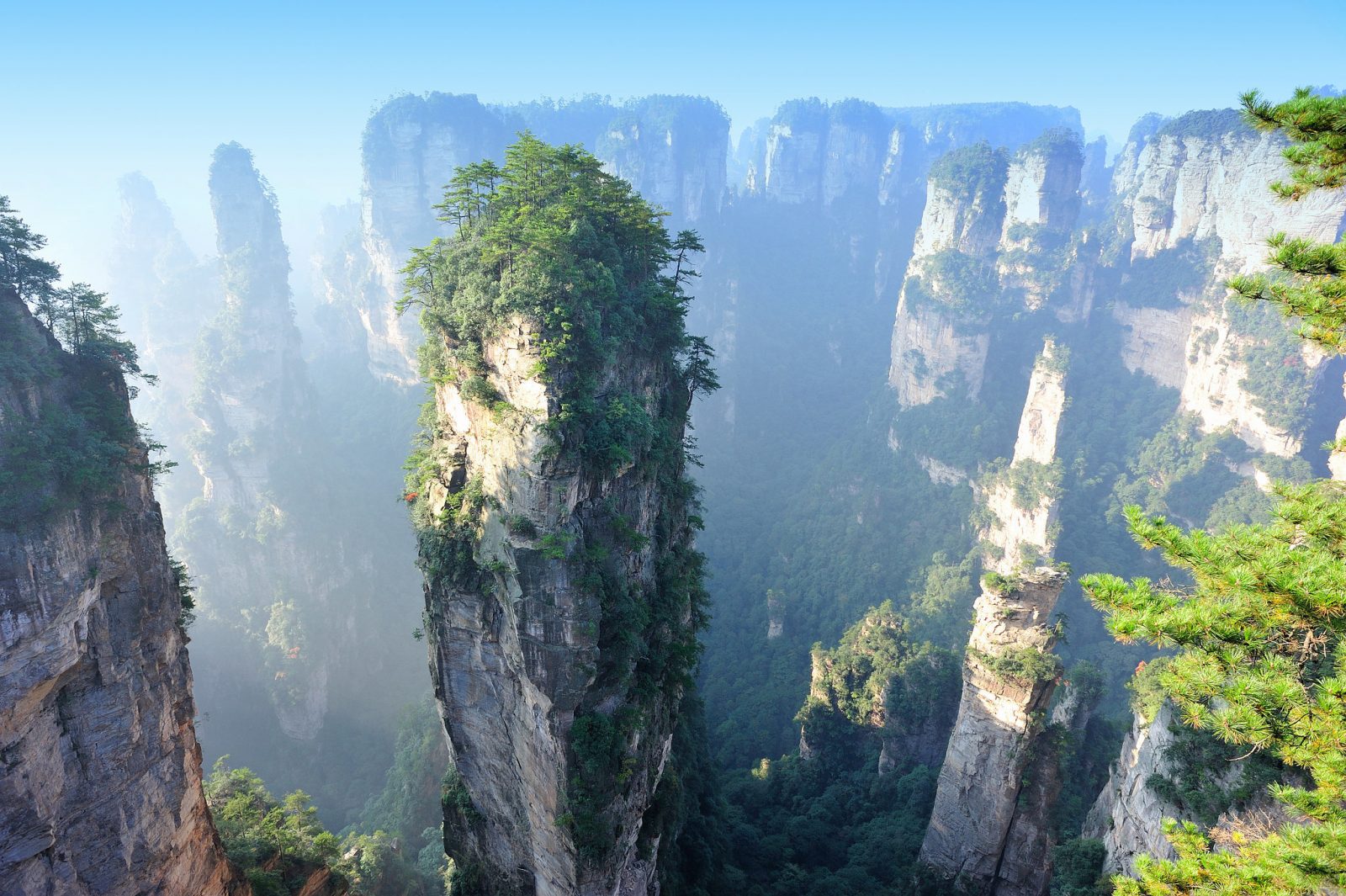 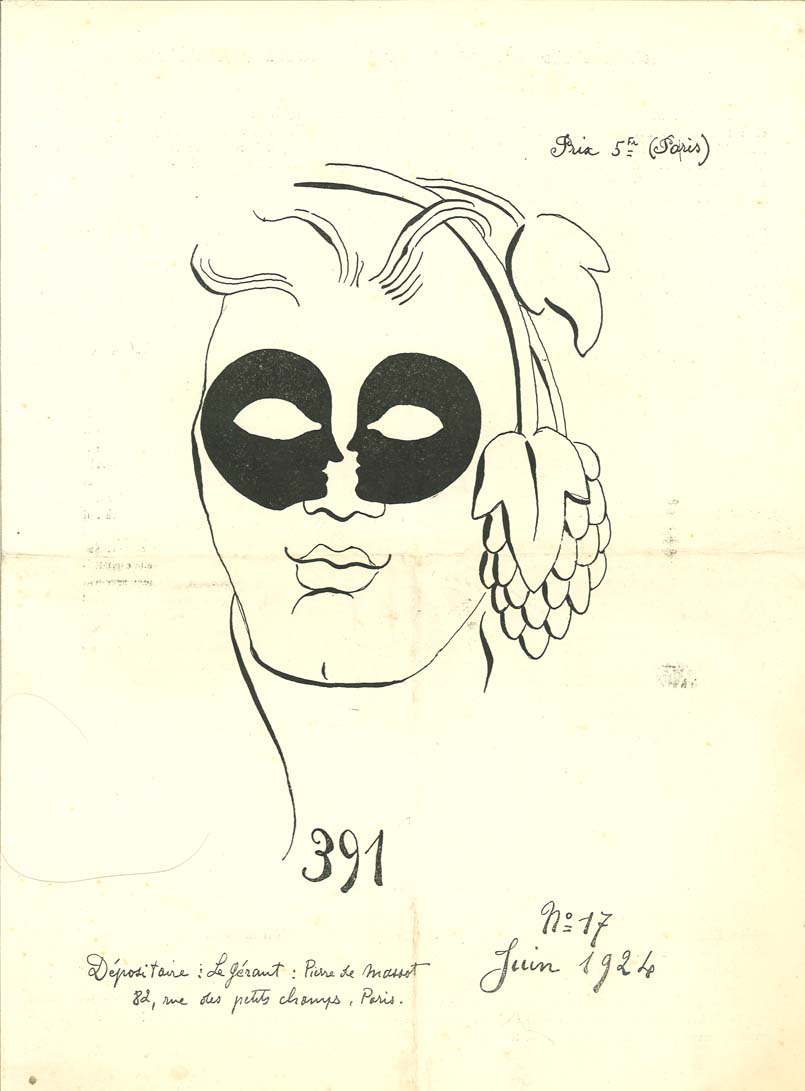