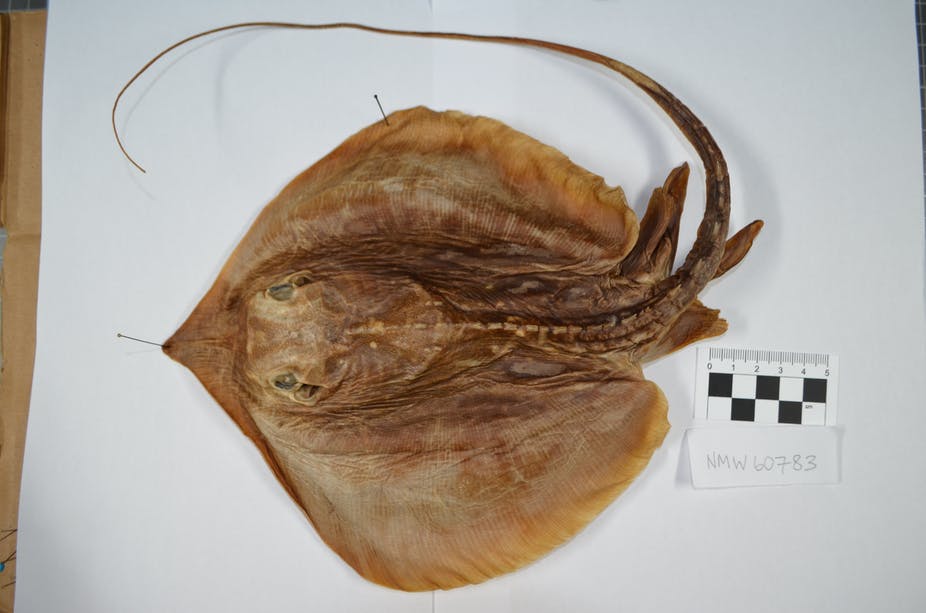 The world has a new species. My colleagues and I were hugely excited to announce it but, alas, this stingray – a distant cousin of sharks – can’t be claimed to be a particularly spectacular or awe-inspiring animal. It’s small – about the size of an outstretched hand – and, as far as we know, plain, without distinctive markings. But what’s special about this stingray is where it came from, how we came to discover it – and why we may never see it again.

“Discovery” might conjure up images of intrepid marine biologists finding this animal hidden in a remote cave, or while diving into the abyss in a submersible. In fact, many of the sharks and rays discovered in recent years have been found in fish markets. But not this one! We found it in a glass jar, on a shelf, in a museum, in the centre of Vienna.

The new species – to be known scientifically as Hemitrygon yemenensis – is, you’ve guessed it, from Yemen, on the Arabian Peninsula. And it comes with quite a story.

In 1902, an Austrian husband and wife team – Wilhelm and Marie Hein – were in the coastal town of Qishn, to study the unique Mehri language. While placed under house arrest by the local sheikh, the Heins busied themselves. Marie, in addition to providing medical treatment to locals, collected over 2,000 botanical and zoological specimens, which, fortunately for us, included two stingrays. These specimens – a male and a female – were preserved and brought back to the Natural History Museum in Vienna where they sat in a glass jar gathering dust for 115 years.

As part of my ongoing research work on the elasmobranchs (sharks and rays) of the Arabian region, I had been aware of the Heins – one of the other fish they brought back was a small shark, which turned out to be a story in itself. I had been combing through the museum’s list of specimens from the Heins’ expedition when I noticed a mysterious entry – to an old, now obsolete name for a stingray. Further investigation – and preliminary photographs kindly emailed by the museum staff – suggested these were something special we hadn’t seen before, so I packed my bag and headed to Vienna.

On a chilly November morning, deep in the cavernous back rooms of the impressive old museum, the sealing wax on the jar was broken. As I gently drew out the stingrays – pale and shrivelled from a century in alcohol – I wondered if I was the first person to have handled them since the Heins bottled them on a hot, distant, sun-bleached beach so many years ago.

The painstaking work of measurements, observations and photographs then began – recording everything from the relative size and position of features like fins and gill slits, the shape and coverage of tooth-like “denticles” on the skin, to the angle the snout makes (the first time I had used a protractor since school).

Having this information allowed us to compare the Yemen specimens with known, closely related species – and pick out key features that, in combination, define the new species. This information is published in a “description”, the scientific document (admittedly, a dry one) that officially names the new species and designates a single individual museum specimen as the “holotype” to which all future researchers should refer. The scientific name and description are also the fundamental building blocks underlying all species identification field guides that fishers, divers and scientists might use.

But what do we know about this species? Sadly, almost nothing – and chances are it will stay that way. Other than the two museum specimens collected over a century ago, the animal is completely unknown to science.

Small stingray species don’t tend to swim far, and often have small geographic ranges as a result – so there is a chance H. yemenensis only occurs in Yemen. Yet research there is almost impossible due to a brutal ongoing war and humanitarian crisis, decades of previous conflict, and it being among the “least developed countries” for indicators like poverty, education and life expectancy.

The intensive, unmanaged and unsustainable fisheries in these areas – often by foreign vessels – threaten not just unique marine species like our stingray, but the livelihoods of the fishing communities themselves. There is even a chance that our species may have become extinct before we realised it was a new species, like the “lost shark” found recently.

We can but hope that Yemen, and countries like it with rich biodiversity, has a brighter future. The formal name of our new species celebrates the country it was found in, but we have proposed the vernacular name “Heins’ stingray” to acknowledge the role of Marie and Wilhelm in helping to document the riches – biological, linguistic and cultural – of this part of the world.

It seems remarkable that the only shark and ray specimens the Heins bought back turned out to be new species, especially as non-specialists with limited access to information. Sadly, Wilhelm died the year after the expedition, at the age of just 42. It is hoped that his stingray has not died out with him.

Alec Moore received funding from the Fisheries Society of the British Isles to conduct the museum research. He is affiliated with the IUCN Shark Specialist Group.

Previous post Want a more meaningful life? Ask yourself: “Who would I take to a remote island?”

Next post From Victorian demons to the Beijing night bus: why we tell each other urban legends
Close
Menu
Social profiles