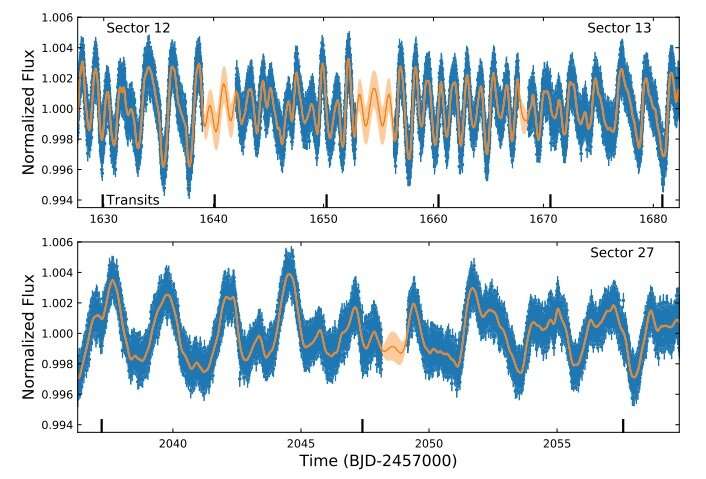 Astronomers report the discovery of a new sub-Neptune exoplanet as part of the TESS Hunt for Young and Maturing Exoplanets (THYME) program. The newly found alien world, designated HD 110082 b, is about three times larger than the Earth and orbits a relatively young star. The finding is reported in a paper published February 11 on arXiv.org.

NASA’s Transiting Exoplanet Survey Satellite (TESS) is conducting a survey of about 200,000 of the brightest stars near the sun with the aim of searching for transiting exoplanets. So far, it has identified nearly 2,500 candidate exoplanets (TESS Objects of Interest, or TOI), of which 107 have been confirmed so far.

The THYME collaboration aims to identify planets transiting stars in nearby, young, coeval populations. To date, the project has detected three extrasolar planetary systems and the finding of another one is reported in a recently published paper. The team, led by Benjamin M. Tofflemire of the University of Texas at Austin, have identified a transit signal in the light curve of the star HD 110082 (or TOI-1098). The planetary nature of this signal was confirmed by follow-up observations.

“We report on the discovery of a sub-Neptune-size planet orbiting the young star HD 110082 (TOI-1098). Transit events we initially detected during TESS Cycle 1 are validated with time-series photometry from Spitzer. High-contrast imaging and high-resolution optical spectra are also obtained to characterize the stellar host and confirm the planetary nature of the transits,” the astronomers wrote in the study.

HD 110082 b has a radius of approximately 3.2 Earth radii and is assumed to be some 11 times more massive than our planet. It orbits its host every 10.18 days, at a distance of about 0.113 AU from it. The transit duration of this planet suggests that it has a low orbital eccentricity, most likely at a level of around 0.2. Given that the HD 110082 system is estimated to be relatively young (some 250 million years old), the newly found alien world could be very helpful in testing planet formation and evolution theories.

The parent star is of spectral type F8V located about 343 light years away. It has a radius of around 1.19 solar radii and a mass of approximately 1.12 solar masses. The star has an effective temperature of about 6,200 K and a metallicity at a level of some 0.08. The object is assumed to reside in a newly detected young stellar association designated MELANGE-1.

The findings provide important clues about parameters of young extrasolar worlds in general. “HD 110082 b’s radius falls in the largest 12 percent of field-age systems with similar host star mass and orbital period. This finding supports previous studies indicating that young planets have larger radii than their field-age counterparts,” the authors of the paper concluded.

The astronomers also found that HD 110082 has a low-mass M dwarf companion. The object is estimated to have a mass of some 0.26 solar masses and is separated from HD 110082 by approximately 6,200 AU.