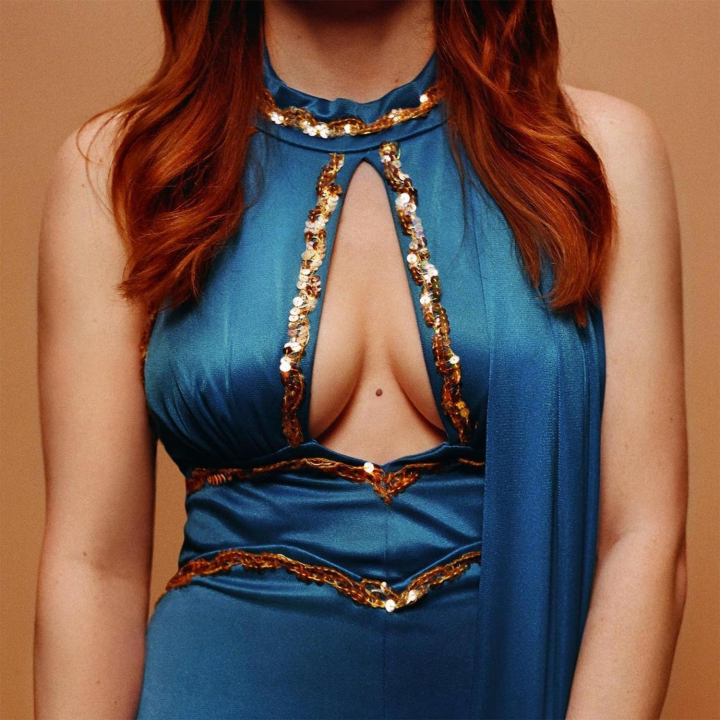 Being a singer-songwriter doesn’t just mean typing lyrics into a word processor, alas. Performers must also craft musical environments that complement their words, voices, melodies, and chosen personalities. It’s a form that not only emphasizes lyrics, but cultivates the illusion of natural, spontaneous communication, and this latter task can be a punishing one.

On her first solo album in five years, the former Rilo Kiley singer and expert storyteller further refines her meticulous, disconsolate craft: 11 more tales of bad romance and LA hedonism, delivered with breezy detachment. These scenarios do not thrill her.

Since her days in Rilo Kiley, Lewis has pondered adulthood from the perspective of someone who hasn’t given up certain modes of youthful independence, which lends her solo music a fraught, distant quality. Over simple, bright, hooky jangle-rock, coated in the crispest of pop surfaces, she cheerfully sings about mortality, drug addiction, the bleaching of pleasure from things she used to enjoy, the tension between being alone and being lonely, the endless search for love.

Hers is a familiar sort of ennui; at times she comes close to rewriting Joni Mitchell songs (“Hollywood Lawn”). I imagine hearing this music in houses with carpeting on every surface, an ashtray in every room, a lingering smell of smoke, and Chippendale that nobody sits in.

The music’s languid warmth presents her dilemma with clarity: this character is stuck, in Southern California and in her own life, as claustrophobia sets in and her songwriting resorts to smaller and smaller gestures, barely perceptible flinches, to convey quiet desperation. Accordingly, she performs with caution; even “Red Bull and Hennessy,” whose perfect mechanical keyboard hook and stomping drums capture a buoyant sense of yearning, collapses into bathos when she enunciates “Hennessy” precisely, despairingly, as if the brand were a self-evident symbol of decadence. The keeper is “Little White Dove,” whose mock funk bassline remains poised in the face of death.

Lewis’s melodic grace and lyrical precision mesmerize, but she’s suffered through these dramas before. Does her ennui stem from the dramas themselves, or having to sing about them?

Sir Babygirl: Crush on Me (Father/Daughter)

As a former hardcore punk singer having switched to bubblegum, Kelsie Hogue specializes in manic buzz, in music that crackles with electricity in imitation of the human heart. Her first album rocks with extreme compression and gleeful confidence.

As pop styles go, Sir Babygirl’s is glittery without being pristine: bouncy keyboard loops, theatrically synthesized strings, bursts of chintzy electric distortion, fabulous rhythm guitar hooks, static and fuzz, all crammed into the same space, forced to coexist at risk of explosion. Electronic brightness and rickety crunch, two modes that are in theory opposed to each other, combine to produce knotty density; the squeaks and whooshes and synthesizer flourishes click together with sprung tension.

Her voice incarnates pop-punk singing — loud, elated, given to and indulging in joke melisma. Her gift is for matching musical hyperactivity with emotional absurdity: plastic, bubbly music abounding with noises and beats and stimuli exactly captures the terrifying, marvelous adolescent utopia these songs cohabit, as crushes and parties and freakouts fly by and make her dizzy.

In “Pink Lite,” clanky guitar chords create a melancholy that disperses every time the chorus comes around. “Cheerleader,” a fever dream of contradictory gender tropes, glides ecstatically over friendly keyboard bleeps and excitable power chords; toward the end, actual cheerleaders start to chant behind her. Propelled forward by her happiest, most playful guitar riff, “Flirting With Her” gradually builds to the key moment when the “her” in question texts “hey”; the rest of the song is an exuberant scream: “AAAAAAAAAAH!”

By portraying a diverse range of emotions — confused agony, social anxiety, the excitement of getting lost in the city and lost in love — she celebrates emotional resolve: she’s delighted to feel things so strongly. This album’s electric energy sparkles.

When Nilufer Yanya first started releasing bent guitar laments, her talent was for starkness–she sang incantations disguised as confessionals, conjuring fascination just from her spacey voice, percussive chords, and the power of repetition. On her first album, the London singer-songwriter develops that spare template into a louder, technologically damaged guitar-pop style.

This album’s beguiling surface isn’t perfectly smooth — Yanya interrupts the liquid flow with intermittent vocoded skits in which she impersonates the preprogrammed voice at the end of a therapy hotline, intoning slogans about personal improvement (didn’t Prince decree a ban on such things after the ‘90s?). But the skits reveal her musical strategy, in both sequencing and composition, which is to place the full-fledged guitar songs in an environment of white noise, seeping static, electronic twitches and hums, and barely perceptible shimmers and echoes, stuck in a mechanical vacuum, or maybe just the outside world, where background noise always lingers.

What so puzzles and enchants is that this is theoretically conventional rock band music — assembled with spareness, using the minimal ingredients of guitar, drums, and so on, played at mostly brisk tempos — that, thanks to Yanya’s ear for where to incorporate empty space, plays like immersive soundscape. Her twisted, angular, fuzzy, solid, muscular guitar sound lashes out in discrete blats, leaving pauses between each riff, dividing songs into blocky chunks: the woozy power chords between funk plinking on “Paralyzed,” the thunderous strumming alternating with slower percussive blasts on “In My Head,” the glowing rhythm pattern on “Heat Wave,” whose ‘80s R&B-style keyboards add mesmerizing flash. The lyrics that emerge are often abstractly conceptual, yet intensely felt (“I can think what I want/I can feel what I feel/until you say it out loud, how will I know if it’s real?”). Her voice, an earthy murmur, captures a strange, distant intimacy.

This album presents a series of hummable paradoxes: ethereal and durable, harsh and delicate, propulsive and light. From behind an electronic veil, she sings as a ghost in the machine.

The loudest rockers, “Comeback Kid” and “Seventeen” are remarkable. In both songs, Van Etten returns to her childhood haunts and has a conversation with her former self: aggressively on “Comeback Kid,” whose organ chill and drumstomps gallop propulsively as she keeps calling, “Come back, kid, let me look at you!”; mournfully on “Seventeen,” whose descending piano chords and choked guitar screeches complement her insistence on delivering the terrible knowledge her adult self has learned in the meantime. Both songs capture the tangle of space and memory, an intermingling that might include music, too — “Seventeen,” especially, could stir one of those horrible, stunning moments when hearing a familiar melody prompts an unanticipated outpouring of emotion.

As performed, both songs also illustrate her limitations translating song into sound: in tempo and in the roil of production tricks, they’re still too stately, too restrained, without ever pushing things over the top. “Comeback Kid” builds up a tense, nasty momentum that could have been relieved by a loud guitar climax or a slow fadeout, but it just ends abruptly after the third chorus. “Seventeen” explodes in the bridge, when the backing drops out and she jumps up an octave to yell “I know what you’re gonna be,” but afterwards, in the final chorus, the guitars struggle to find their footing again, as if knocked off the beat by what was supposed to be the climax.

Such caution marks the rest of the album, which simply lacks momentum. Van Etten, on paper a heartfelt romantic given to solemn cathartic gestures, doesn’t rock but thuds, as each song inflates to giant size and keels over. Glitchy sound effects, like the looped moans in “Memorial Day” or the sticky organ in “You Shadow,” lend a clunky density to songs that want to soar.

Albums this top-heavy are rare. Trying to playfully nudge conventionally expressive models of rock songwriting, she chooses density over clarity.

The post The Singer-Songwriter Complex appeared first on Hyperallergic.