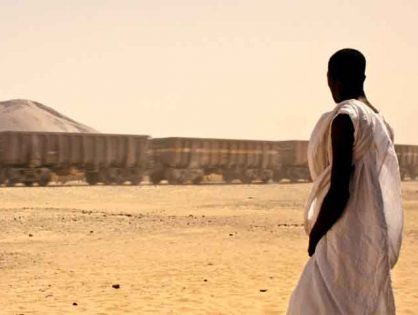 At 430 miles long, the formidable Mauritania Railway, nicknamed the “backbone of the Sahara,” boasts some of the longest and heaviest trains in the world. Its journey begins in Zouerat, Mauritania, where 22,000 tons of iron ore are mined daily and transported across the searing desert to the port city of Nouadhibou, on Africa’s Atlantic coast. Sometimes the train also carries passengers—merchants who travel illegally atop the train to transport food and supplies to remote Saharan communities. The ride is treacherous. Many die en route.

Malick, a 27-year-old merchant, takes his chances. He relies on the train for his livelihood, as do the many people who live along the train’s route. Miguel de Olaso and his four-person camera crew, disguised as fellow merchants, made the 30-hour trip with Malick in the train’s open-top wagons. The resulting short documentary is a deeply immersive, cinematic glimpse into a way of life that exists nowhere else in the world.

“If the train goes through a sandstorm, you feel like you want to die,” de Olaso told The Atlantic. “All you can do is just close your eyes and let it pass.”

The train ride was so unbearable that de Olaso vowed never to return. But he was moved to come back time after time to film the resilience he saw in the Mauritanian merchants, whose grueling journey plays out against the backdrop of one of the Earth’s greatest and most unforgiving vistas.

This article was originally published on TheAtlantic.com