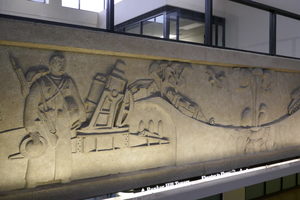 Above the entirety of the World Trade Center concourse in downtown Los Angeles is Tony Sheets’s impressive “The History of World Commerce” bas-relief.  Intended to depict the whole of humanity’s exploits in industry and economy, the 1,000-foot-long artwork stretches through thousands of years of history. Encompassing a vast number of cultures and moments throughout time, it is filled with details both easily recognizable and obscure. If you stand on the northernmost side (closest to Third Street), you can even spot the Bonaventure Hotel itself in the work.

Active since 1972, Sheets is a noted designer, painter, and sculptor, with several works in the downtown area alone.  He’s also the son of famed artist and designer Millard Sheets, known for his vibrant Home Savings and Loan bank buildings often adorned with eye-catching mosaics and sculptures.

The World Trade Center feels more like an abandoned train station from the ’70s than it does a “World Trade Center.”  With its gleaming tiles, multi-tiered concourse, and motley collection of hanging-in-there shops and eateries, not to mention pocket gardens, its was designed as a pedestrian mall during the 1970s Calvin S. Hamilton era of public design, noted for its promotion of “pedways.”

The overriding wisdom of the time was that pedestrian and motor traffic should be separated—hence this grand pedestrian mall, indoors and several levels above street level (with tennis courts on the roof!). Only a handful of pedways were actually built before the plan fell out of favor with Los Angelenos.

“The History of World Commerce” is an immense and important piece of work, and despite the hidden-away nature of the piece, it’s absolutely worth seeking out. Make an afternoon of it, and explore the pedways that crisscross this part of the city.