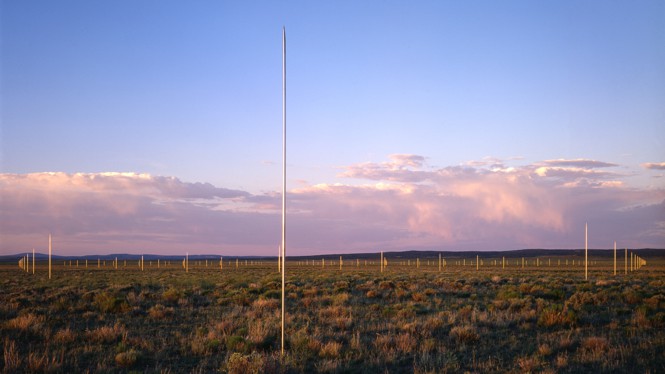 If it’s possible to identify exactly where it begins and ends, one might say the artwork started in a simple white-stucco storefront in Quemado, New Mexico. Inside a low-ceilinged room, a stack of release waivers on a clipboard reminded guests of the risks of walking through uneven terrain, or encountering the occasional rattlesnake. Overhead, a small clock ticked by. The Lightning Field, a land-art installation by Walter De Maria completed in 1977, is a place I’d wanted to visit ever since I’d moved to the Southwest. Last month, I finally got the chance.

I’d tried twice to make a reservation the usual way. You used to have to send a handwritten letter. Now you send an email and hope it gets plucked from the pile that arrives soon after midnight on February 1, when reservations open each year. (There are always more emails than available slots.) When that didn’t work, I tried the journalist’s back door—writing to the publicist.

I hadn’t anticipated that seeing the installation would feel more like inhabiting it: 400 precisely arrayed steel poles spread across a stretch of high-desert grassland, polished two-inch tubes enclosing rods with needle-sharp tips. The poles are anchored in the ground so that their tips reach the exact same height, a horizontal plane a kilometer by a mile, like a giant bed of nails against the sky. The exhibit is open to no more than six visitors a day.

My wife and I had driven five hours from Phoenix and followed instructions to arrive by 2 p.m. sharp. Around 2:15 p.m., we joined the rest of our party in a black Yukon, driving northeast through rangeland dotted with juniper. It was enjoyable to be part of a club of only six, and intimate, too: We’d be spending the night together in an old homesteader’s cabin refurbished as part of the installation. In an essay explaining The Lightning Field three years after its completion, De Maria wrote that part of the artwork’s “essential content” was the contrast between a large space and a small number of visitors, and that “isolation is the essence of Land Art.”

I was torn. We live in an era when trips to cultural and natural sites are relentlessly documented, to the point that aficionados have cataloged whole lists of the waterfalls, ancient ceremonial sites, and Mediterranean towns “ruined” by Instagram. I appreciate a good dose of privacy, all the more so in a beautiful spot. But if the land-art movement arose in part as a response to the cloistered world of urban galleries and museums, I couldn’t help but think that the measures protecting De Maria’s vision also served to re-create the art world’s penchant for exclusion and preoccupation with status.

The nonprofit Dia Art Foundation was created in 1974 to support artworks whose scale or scope made them especially hard to execute and fund, and it became an important backer for De Maria. In preparation for constructing The Lightning Field, De Maria crisscrossed the Southwest by car and small plane, fixating on lightning-prone western New Mexico. He ultimately found the land that Dia would purchase—north of the Datil Mountains, near the continental divide—thanks to a classified ad in a local newspaper. “The land is not the setting of the work, but a part of the work,” De Maria wrote.

We passed decaying single-wides and shiny fifth-wheels and a Let’s Go Brandon flag as we turned down rutted roads lined with barbed wire, until, without my noticing, the juniper disappeared, and all that surrounded us was a motley bouquet of grass, wildflowers, and sagebrush. I was compelled by the fact that De Maria had conjured an art-world destination in surroundings so remote. At the end of an hour, like a mirage, the first poles came into view off the right side of the road. From a distance, it looked like partially built infrastructure—radio antennae or improbably high fence posts.

To see the field through the window of a moving car is, in a way, not to see it at all, like the drawing of the old lady who morphs into a young woman, images whose meaning you can’t digest until your eyes adjust. De Maria’s prohibition on photography and insistence that The Lightning Field should be experienced in doses of “at least a 24-hour period” gave our visit the feel of an excursion. We got out and brought our things inside an old log cabin 200 yards north of the field, refurbished as part of the site’s initial construction. “Welcome to The Lightning Field,” our host, Davey Hawkins, said. Hawkins, an artist who helped archive De Maria’s work after his death, lives on-site seven months a year, and ferries guests back and forth to Quemado seven days a week. He stated only two rules: no photography and no touching the poles.

Hawkins left. We stepped out the cabin’s back door to walk the perimeter. And just like that, the image shifted: The awe of nature merged with the focused attention of museum-going. The first pole stood tall in the afternoon light, steady against the breeze. The second towered over a puddle left by the previous night’s rain, and transformed by daylight into a reflecting pool, a glittering metal point piercing the sheen of sky and clouds on the water’s surface. As I walked among the poles, my eyes flitted back and forth between expanse and microcosm, between the outline of distant mountains on the horizon and the red-and-black-striped beetles burrowing at my feet. A storm formed in the southern sky. As the afternoon wore on, the pastels of the landscape deepened, a subtle flux of colors peaking, then dissolving into dusk.

I chatted with one of our companions about the conceptual trick at the core of The Lightning Field. Here we were, happy to spend hours ambling around a rectangle of grassland not so different from tens of thousands of other such rectangles extending outward in all directions. Precisely measured and visually borderless, The Lightning Field presents a conundrum about the source of its marvel. In hundreds of hours driving through the Southwest, I hadn’t ever stopped to revel in the land’s vastness in the same way, pacing out most of a square mile, toggling between ground and horizon. Either De Maria put one over on us, we reasoned, or his sculpture’s power lay in its function as an observational device, like a pair of binoculars parceling out the infinite for our self-centered and perennially distracted selves.

In the weeks leading up to our visit, I tried to decide what I thought of the artwork’s no-pictures rule, and Dia’s careful control of the experience. The cabin’s simplicity betrayed a curator’s touch: no trace of decoration or paint on the walls, and in the cabinet, precisely six mugs, six plates, and six bowls. The detail that seemed spontaneous was the collection of bug spray and sunscreen left behind by previous guests. What it added up to was special, but it also seemed to narrow the scope of The Lightning Field. While expanding access may bring the risk of vandalism or environmental impacts, the road to actually get to the art is likely to discourage all but the most dedicated visitors. (Hawkins had already towed several people out of “mud holes” this season.) People could surely enjoy an hour’s visit and get some of the same thrill, or camp somewhere nearby. I struggled to see the point of maintaining artwork in perpetuity only to restrict the number of people who can see it so sharply, or to constrain how they’re able to interact with it and share the experience.

Alexis Lowry, a curator at Dia, said De Maria’s opposition to photography on the site stemmed from the conviction that the artwork shouldn’t be revealed before you showed up—that photographs could ​both “overdetermine and undermine the experience before you see it.” Coming, as it did, decades before the advent of cellphone cameras, De Maria’s preference can seem both quaint and prophetic. The release waiver we signed asked us to abstain from taking photographs for the sake of De Maria’s vision and “out of respect for Dia’s copyright.” But the notion of a copyright seemed to me to undermine the spirit of The Lightning Field, especially if the land—studded with petroglyphs and Ancestral Pueblo pottery stretching back thousands of years, and inhabited by the heirs to those traditions—was integral to the artwork.

Close to sunset, the tapering tips of each pole caught the light like a candle flame, and for a moment, the field turned into a birthday cake. Wispy clouds shrouded the craggy silhouette of the Datils and eventually blotted it out entirely. It rained long and hard while we ate dinner, and after dark, we grabbed rubber boots stored in a bedroom closet and set out to see lightning light up the field. It’s a rarity for a pole to be struck, but the weather still put on a show. We tromped around in mud that felt like cement, each leg carrying 10 pounds of wet earth as we set one boot in front of the other. Bolts from beyond the field lit up the poles’ tips as silhouettes; bolts from behind us illuminated rows of gleaming steel. In the morning, the impulse to sit and gaze out was rewarded with the sight of three pronghorn antelope wandering among the poles, their faces a flash of black and white in a sea of tawny brown. “We’re doing what people don’t do anymore,” someone said: sit on the porch and watch the world go by. For once, it was easy to leave my phone in my pocket. Besides, De Maria was right. The photos don’t do it justice.

Previous post <em>Black Panther: Wakanda Forever</em> Does the Near Impossible

Next post Why Did Gay Rights Take So Long?
Close
Menu
Social profiles