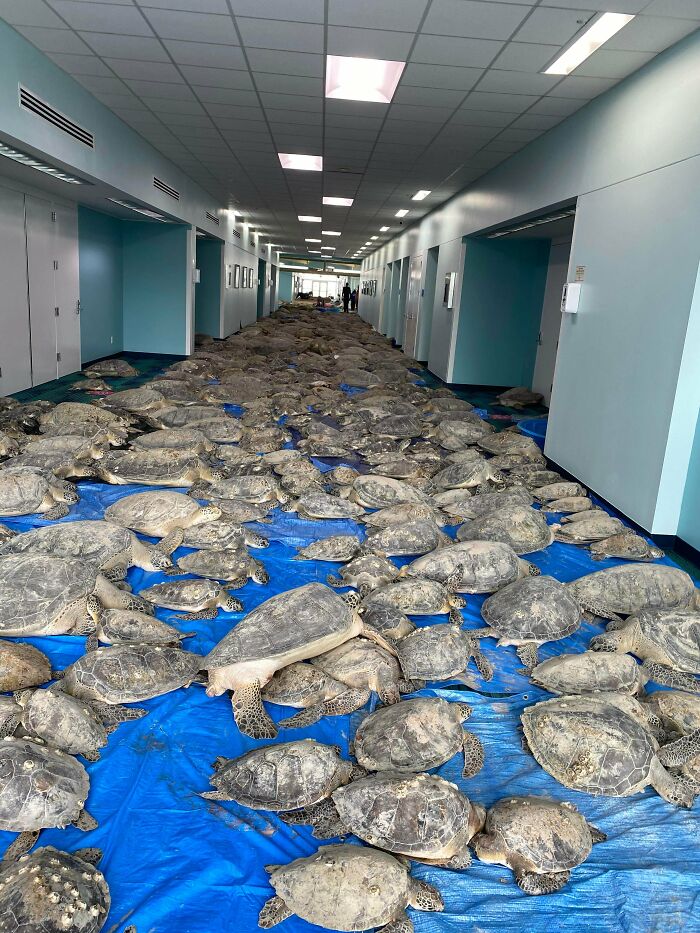 All eyes are on the southern US states, most of all, on Texas. A powerful winter storm has brought everything to a standstill this week, leaving millions without power, and has claimed the lives of at least 21 people in the area. But this dark and frigid time is also a time of bravery and compassion. Texans are bringing their pets, farm animals, and wild animals inside their homes to protect them from the icy cold and to keep them warm. They’re also rushing to save sea turtles. If this isn’t proof that our true humanity shines through in the toughest times, I don’t know what is.

People shared photos of the efforts to help animals after journalist Yashar Ali started up a Twitter thread. Have a scroll down to see how people are lending a helping hand to our animal companions and how the cold unites us in our love for one another. Remember to upvote the pictures that you think are great representations of our kindness.

Bored Panda reached out to the ‘Sea Turtle, Inc.’ team whose volunteers are saving thousands of turtle lives in Texas. Read on for what their representative had to say.

You know its cold in Texas, when these things let you to pick them up.

I’ll say it upfront: even though the situation is dire and people are suffering, I’m proud of those who are taking care not just of themselves, but also other living beings. Not to sound too sappy, but I believe it’s our capacity to look beyond just ourselves when we feel threatened that is the true spirit of humankind. And the cold-affected states are showing that their legendary southern hospitality goes deeper and further than others would think.

A representative of ‘Sea Turtle, Inc.’ told Bored Panda that as of Wednesday night, they’d saved 4.5k turtles and counting. “Efforts are still ongoing but rescue efforts have seen much fewer turtles stranded on Wednesday which is a good sign,” they said.

Lara told Bored Panda that her mom is part of a larger volunteer team who are assisting the members at ‘Seat Turtle, Inc.’ on South Padre Island. “She’s been volunteering with them each winter for the last 4 years. The number of turtles brought in continues to go up because the water temperatures are still ‘cold stun’ temps (below 55 degrees F). The last I heard, the rescue center had brought in something like 4,500 turtles.”

Lara said that she’s “extremely thrilled’ the turtles are getting the attention they deserve. “The center always needs donations, so having people tell me they’re donating is very heartwarming. It’s also a lot of fun to have thousands of people on Twitter telling you how awesome your mom is (even though I already knew that)!” she said.

“I am just the bystander who tweeted the picture; I don’t live in Texas myself. My mom is lucky to be far enough south to have relatively warmer temperatures compared to the rest of the state. So while it’s still very harmful for the turtles, she has personally been ok, and I’m very grateful for that. It’s devastating to see what so many Texas residents are experiencing right now, and I sincerely hope that the power can be restored as soon as possible for all of the people who are suffering around the state.”

“We want to gradually bring them back from the cold temperatures so people bringing them in cannot turn on car heaters. Gradually bringing up their body temperatures will do less long-term damage than trying to warm them up faster,” the representative explained the intricacies of transporting the sea turtles.

“Sea turtles are cold-blooded animals so they rely on the water temperature they are in to regulate their body temperature. Once they go into this hypothermic shock state we called cold-stunned they cannot move flippers or bring their head up to draw breath. They become paralyzed and very vulnerable out in the water. If not rescued they could drown to death. We continue to watch these cold temperatures, but Saturday is looking like a good day of water temperatures for some to be released back into the ocean. This day is not official yet.”

If you’d like to support ‘Sea Turtle, Inc.’ and all the good that they do, you can send them a donation through their main page right here. “We have been amazed at the outpouring of assistance we have received. We are in need of monetary funds to continue the care of these animals. Some will stay in our hospital due to injuries they can in with aside from the cold stun state. That will take weeks or even months of rehabilitation.”

Texans, as well as Americans from other southern states, were encouraged to bring their farm animals inside during the cold snap. I know it’s a very difficult time, but the photos of the animals making themselves at home inside really do restore a part of your humanity.

The cold has had a powerful negative impact not just on the residents of the southern US, but also on the livestock industry. Power outages disrupted supply chains and animals were left running short on food and water.

It’s not just farm animals that are getting lots of love from the southerners. People are also rescuing thousands of sea turtles in Texas that were stunned by the cold. The temperature dropped to just -14 degrees F (-10 degrees C), the first time this happened since 1989. Temperatures rose to the 40s on Wednesday (around 4 degrees C) are expected to rise slowly and reach the 60s (over 15 degrees C) by the weekend.

We are grateful for the support of the community (near and far), City of South Padre Island leadership, and City of South Padre Island Convention Center for responding to our emergent needs. Tonight’s count is over 1,700 cold – stunned sea turtles being housed at the facility and the City of South Padre Island Convention Center. We ask the public to shop our amazon wishlist and to donate to our cause. Three resident sea turtles have already been removed from the tanks tonight and are inside the education center. We will be needing to move the other two residents soon if the power is not restored. Staff, volunteers and community are working tirelessly to provide critical care for these magnificent creatures.

Texans, volunteering with ‘Sea Turtle, Inc.,’ are taking the sea turtles to the South Padre Island convention center. Ed Caum, executive director of the South Padre Island Convention and Visitors Bureau told the Associated Press about the amount of help people are providing: “Every 15 minutes or less there’s another truck or SUV that pulls up.”

What they gathered today in South Padre.

According to Caum, people sometimes bring in just a single turtle or a pair. Meanwhile, others drive in with their trailers loaded up with 50, 80, and over 100 turtles. Wholesome? Wholesome! If this were an adventure book, the turtles would owe their saviors a (cold) blood debt and later arrive in humankind’s greatest moment of need (we’re still waiting for the alien invasion and zombie apocalypse that 2020 promised, remember).

Freezing to death. Some of us quite literally.

I converted my dining room into a spot for the animals for the ‘blizzard’ coming!

Caum confirmed to AP that they’ve “collected” more than 3.5k sea turtles so far. Bored Panda has since learned from ‘Sea Turtles, Inc.’ that the number of turtles helped out is higher. However, Caum stressed the sad reality that not every turtle will be able to be saved: “We know we’re going to lose some.”

Hopefully, as the temperature in Texas continues to rise, the turtles will be able to be released back into the Gulf once it’s warm enough. “We’re trying to do the best we can to save as many turtles as possible,” Caum said, adding that they were able to keep the turtles warm once power to the convention center was restored.

What are your thoughts about people opening up their hearts and homes to animals? Would you do the same if there were any animals in need near you, dear Pandas? If any of you are in Texas or the southern states, what is the situation like in your local area? Let us know in the comment section. Stay warm!