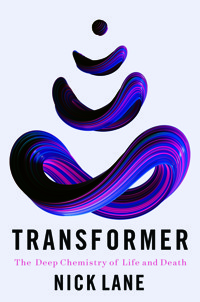 The cover of a nonfiction book is like the hood of an automobile: Nudge it open, and you’ll find sentences like cylinders and pistons folded and coiled together, an engine ready to propel us toward answers to daunting questions. How did life begin? What is art for? What transpires inside our cells? How do our nation’s values hold up in an era of accelerating change? The best nonfiction does more than just assemble information. It takes a reader through curious landscapes, offering a deeper grasp of how the world moves and, most important, what moves it.

The seven nonfiction titles below are not textbooks; they’re accessible to lay readers, give an overview of crucial topics, and can serve as a jumping-off point for further research. They investigate what our society values and what it’s built on, driving us to the monumental, the sublime, the quintessentially human.

Transformer: The Deep Chemistry of Life and Death, by Nick Lane

Lane, an evolutionary biochemist, is eminently qualified to investigate how we define life. In an earlier book, The Vital Question, he put forward a provocative hypothesis on how cells formed from the jostle of atoms. For almost 2 billion years, he proposed, bacteria and archaea, two of the three kinds of organisms that exist on our planet, churned through ancient oceans until a single archaeon swallowed a bacterium and emerged as the mother of all multicellular descendants—including us. With Transformer, he continues his indefatigable exploration of the genesis of biology. Lane focuses on millions of years of evolution and the planet’s twists and turns—the Great Oxidation Event, the Cambrian explosion—while profiling visionary scientists. He beautifully lays out the sheer improbability of our biosphere, explains why life may be exceedingly rare in our universe, and considers death as a process, not simply as an instantaneous end.

David Smith: The Art and Life of a Transformational Sculptor, by Michael Brenson

Throughout his career, the American sculptor David Smith was immensely versatile: Although his work was rooted in post–World War II abstract expressionism, he remained committed to industrial materials, reflecting his apprenticeship at a Studebaker factory during his youth. Smith’s aesthetic, which steamrolled over European conventions, owed a debt to Pablo Picasso’s (like the Cubists before him, Smith saw his pieces as removed from, even opposed to, how the real world looked), and he defiantly claimed abstraction as the American artistic idiom. Brenson’s rich, authoritative biography conjures not only the man and his myth, but also the ruptures of modernity and the tensions between abstraction and representation, set against a backdrop of global change. Smith’s pervasive influence shaped artists as diverse as Louise Bourgeois, Frank Stella, and Richard Hunt. “Smith’s breakthrough works of 1951–1952 did not so much as transition out of the 1930s and ’40s as erupt into the second half of the century,” Brenson writes, “projecting an entire different speed and flow, in their inventiveness … contributing to the revolt against ‘the fixed form, the changeless and self-contained.’” For Smith, sculpture was a declaration of independence.

Capital in the Twenty-First Century, by Thomas Piketty, translated by Arthur Goldhammer

Published nearly a decade ago, and a surprise best seller, Capital in the Twenty-First Century looks back in order to look forward, plumbing economic patterns from the 18th century onward and homing in on the staggering inequities that dominate our age. Piketty, an internationally acclaimed French economist and polymath, draws on social history and literary classics—European revolutions, novelists such as Jane Austen and Honoré de Balzac, the sectarian divide in the United States. He devotes special attention to the economic hierarchies that have taken root over the past 40 years. Piketty pinpoints 1980 as a pivotal year: The rise of the free-market ideologues Ronald Reagan and Margaret Thatcher cemented the power of elites and dealt a blow to the fairy tale that integrity and work would always pay off. Like Binyamin Appelbaum in his book The Economists’ Hour, Piketty credits capitalism with improving efficiency while creating economic divides that push the bounds of morality.

The Hemingses of Monticello: An American Family, by Annette Gordon-Reed

Our most erudite founder enslaved and exploited hundreds of people, but he was especially enmeshed, both publicly and privately, with one family in particular. Gordon-Reed, a law professor and historian, unspools this saga in her magisterial Pulitzer Prize–winning account of the relationships between the Hemingses and Thomas Jefferson, virtuoso of the revolutionary generation. In Gordon-Reed’s vibrant, judicious telling, Elizabeth, an enslaved person and the Hemings matriarch, was the fulcrum of her children’s fates and fortunes, ensuring their survival from the moment she was brought to Monticello after being inherited by Jefferson’s wife, Martha Wayles Jefferson. Elizabeth’s daughter Sally, Martha’s half-sister, accompanied the future president to Paris in the 1780s, where she became pregnant. In France, Sally was legally free; she agreed to return to bondage in Virginia after Jefferson promised to liberate their future children when each turned 21, an oath he only partially honored. “Hemings seized her moment and used the knowledge of her rights to make a decision based upon what she thought was best for her as a woman, family member, and a potential mother in her specific circumstances,” the author writes. Gordon-Reed layers her book with meticulous research and revelatory anecdotes, exposing how Jefferson’s life is inextricable from the Hemingses’ just as America’s history is inextricable from slavery.

Democracy’s Data: The Hidden Stories in the U.S. Census and How to Read Them, by Dan Bouk

A data analyst by training, Bouk burrows into the 1940 census, taken as the U.S. emerged from the Great Depression and the world teetered on the cusp of conflagration. His investigation starts with a casual anecdote from that year: A census taker named Selena Catalano makes a house call in Rochester, New York, to interview the matronly Nellie Oakden, Bouk’s great-grandmother. Bouk then widens his aperture by combing through archives and transcripts in other locales, looking at other lives and crafting a cultural history about how information is collected and processed. As a whole, the censuses’ data show that the explosion of cities and suburbs poses challenges to our frail—and, in some cases, outdated—political institutions. As sweeping demographic change has escalated in recent decades—a surge in immigration and a sorting of the parties between cities and suburbs for Democrats and rural counties for Republicans—so too have disputed elections and the threat of gridlock. This searching, textured inquiry illuminates how much simple population figures can teach us.

Apollo’s Angels: A History of Ballet, by Jennifer Homans

Homans’s classic, published in 2010, charts the arc of ballet from its origins in Renaissance Italian and French courts to the dawn of the 21st century, when the grace and vigor of George Balanchine and other modern masters bloomed. She examines the way ballet as an art form has intersected with political ideas over the past 500 years, encompassing the divine right of kings and the twilight of empires. She’s particularly strong on seminal figures such as Louis XIV, the “Sun King” (himself a dancer); Pyotr Tchaikovsky; Sergei Diaghilev; and Jerome Robbins, as New York rose to challenge a wounded Europe as the epicenter of dance after World War II. Twists and torques, leaps and lunges, relevé and glissade—the body is the canvas upon which the choreographer paints murals of social flux and personal epiphany. Apollo’s Angels is not just a cultural history of a single art form; it’s a prism through which to contemplate the human physique through time and space.

[Read: The death of the American dance critic]

The Song of the Cell: An Exploration of Medicine and the New Human, by Siddhartha Mukherjee

Mukherjee is an eminent oncologist and the Pulitzer Prize–winning author of the best-selling The Emperor of All Maladies and The Gene. His newest book is an expansive study of the cell—the common denominator of all life—and its dizzying range of types and functions. He studies neurons, the cells involved in reproduction, and rampant cancers, and gestures toward a future in which cell engineering could eradicate diseases and transform medicine. Cells are anything but simple structures; rather, they’re sinuous ecosystems, and they come together at a dazzling scale in the body. Blood, for example, is “a cosmos of cells. The restless ones: red blood cells … The healers: tiny platelets … The defenders, the discerners: B cells that make antibody missiles; T cells, door-to-door wanderers that can detect even the whiff of an invader.” Using that twirling prose, he braids history with science; we meet pivotal figures such as the quirky Dutch autodidact Antonie van Leeuwenhoek (who first glimpsed what he called “animalcules” through his microscope) and contemporary Nobel laureates ensconced in their labs, testing gene-editing technologies. Understanding the cell is the key to an age of personalized medicine, Mukherjee argues: Are we ready to embrace it?