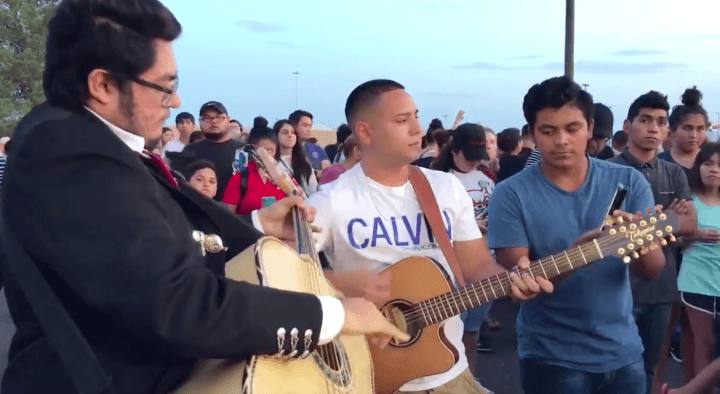 Makeshift memorials and shrines dot the parking lot outside the Walmart in El Paso, Texas where 22 people were murdered by an armed gunman last week. Crosses, candles, balloons, photographs, and flowers have become common symbols of the mourning that follows mass shootings; however, residents of the Texan border town are also using music to remember the fallen victims.

Corridos were widely popular during the 20th-century Mexican Revolution. They are often thought of as anthems written to praise heroes or tell historical tales, but they can also be used to tell stories of loss. There is a comforting familiarity to the sound of corridos, which are commonly heard around El Paso.

While in the Texas city to cover the catastrophe’s aftereffects, photojournalist J. Omar Ornelas found a musical tribute being paid at the memorial site for the shooting victims. “Mexicans never fail in death,” he wrote on Twitter, accompanying a video he captured of the song. “A corrido is born at the site of the #ElPasoShooting.”

As of this writing, the musicians have not been identified.

Mexicans never fail in death. A corrido is born at the site of the #ElPasoShooting #Corridos #ElLlantoDeElPaso #ElPasoStrong #Amor pic.twitter.com/YTxQsjb2Hs

A translation of the music’s lyrics, which are posted below:

I’m going to sing a corrido,

In the United States,

In the city of El Paso, Texas,

Many people are crying,

For what has happened here.

On the 3rd of August,

At the Cielo Vista Walmart,

They never could have imagined,

Their lives would be changed.

A gun was being unloaded,

And my people felt afraid,

They didn’t know where to run,

But everyone helped each other.

These things that I tell you,

The news reported them,

Many families are in mourning.

It was an act of terrorism,

That this monster caused.

He tried to break my people,

But he didn’t succeed.

Now we are more united,

Thanks be to God.

Yesterday, the first victim of the El Paso shooting was laid to rest. The body of Elsa Mendoza de la Mora arrived in Ciudad Juárez, Mexico for burial. According to the El Paso Times, her husband and two children were “inconsolable.”

“They still can’t believe something like this happened to her,” Alma Varga Marquez, a cousin, told the publication.

She was one of eight Mexican nationals killed in the shooting spree by Patrick Crusius, which the FBI is investigating as an act of domestic terrorism and possible hate crime. Crusius is also said to have published a manifesto spouting white nationalist and anti-immigrant ideologies.

President Donald Trump made visits to El Paso and Dayton, Ohio, where another mass shooting occurred over the weekend. None of the eight victims of the Texas attack still being treated at the hospital would agree to meet with the president.

In his manifesto, Cassius wrote that his negative views of immigration “predate Trump”; however, through the 2016 presidential election and during his tenure as president, critics have blamed Trump’s anti-immigrant rhetoric for stoking white suprematism and violence in the United States, normalizing vitriolic speech in the mainstream. When he kicked off his presidential bid in 2015, he had harsh words for Mexico. “They are not our friends, believe me,” he said to a crowd. “They’re bringing drugs. They’re bringing crime. They’re rapists. And some, I assume, are good people.”