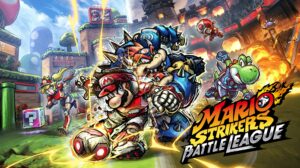 Mario Strikers: Battle League Football is a thrilling take on the football genre, with more end-to-end thrills than FIFA could ever hope for, as well as the chaotic energy that the classic Super Mario items provide. But a stingy offering of single-player modes mean that this is only really worthwhile for those wanting to dive into online multiplayer.

With football games such as FIFA continuing to dominate charts and Mario intent on becoming the most rounded sportstar on the planet, it’s hardly a shock to see the moustached plumber slipping on his football boots.

But instead of opting to do a faithful adaptation of the popular sport, Nintendo has added its classic chaotic energy to the mix; players can foul the opposition without penalty, the offside rule is nowhere to be seen and Wario’s butt cheeks can apparently strike a ball harder than Ronaldo’s right foot.

Of course, this isn’t Mario’s debut in the world of football – far from it. Mario Strikers: Battle League is the third instalment in the series, following on from the GameCube original and the Charged sequel on Wii. But how does the new Switch entry hold up against its predecessors? Here are my thoughts.

When booting up Mario Strikers: Battle League for the very first time, you’ll be introduced to a lengthy tutorial that runs you through every single skill that Mario and his Mushroom Kingdom pals are capable of on the football pitch.

The basic controls are very easy to understand: you can pass, shoot, cross and tackle. Battle League even features auto-aim precision, with passes snapping accurately to teammates. Nintendo has made sure to make this game as approachable as possible for newcomers – even your grandma could probably get to grips with the controls.

However, Nintendo has also made sure to make Battle League entertaining for experienced players, ensuring a surprisingly high skill ceiling with a slew of optional advanced moves.

One-touch passes and shots speed up the ball, while dashing out of the way of an incoming tackle will see your character start sprinting faster than Mo Salah with rollerblades. Find enough space on the pitch, and you can even charge up your shots and use the analogue stick to create backspin or attempt to curl the ball around the goalkeeper. I’ve played Battle League for countless hours now and I feel like I’m still honing my skills since there’s so much to learn.

Each team packs a goalkeeper (who you can’t control) and four outfield characters. You can pick from a roster of 10, with every Mushroom Kingdom character sporting their own stats. Toad is small and weak, but is one of the fastest players in the game, while Bowser is slow and cumbersome to control but is so strong that it’s difficult to knock him off the ball.

I really appreciated this level of depth, allowing you to meddle with the balance of your team as if you were a real life football manager. I would have liked a slightly larger range of characters – you can’t have more than two teams without an overlap – but Battle League at least makes up for this with unlockable gear that allows you to alter the stats of each character.

Just like any other multiplayer Mario game, Battle League features a huge selection of power-up items which randomly appear on the pitch throughout a match. These include Mario Kart favourites such as green shells, red shells, exploding Bob-oms, banana skins and even the Super Star which makes you temporarily invulnerable to tackles.

However, I feel that these items are a little overpowered in Battle League and can become incredibly frustrating – just imagine being through on goal only to be knocked down by the homing-missile red shell. I wouldn’t mind the items too much if they weren’t so frequent, but it’s common to see around 30 power-ups in a single 4-minute match – that’s one item used every 8 seconds.

Factor in the claustrophobically compact pitch, and the excess of explosions can make it very easy to lose track of the ball and concede a cheap goal. Nintendo does at least offer you the option to turn off items for Quick Battles and Multiplayer, but you’re going to have to put up with them when playing through the single-player Cup Battles.

I can also see the Hyper Strikes feature proving to be divisive – when collecting the on-pitch powerup, you’ll be given the chance to power up a move which can (if timed successfully) award you with not one, but two guaranteed goals. I don’t personally mind this feature as it requires you to power up the move without being tackled which is incredibly difficult against a skilled opponent. Plus, Hyper Strikes help to keep players on their toes since you can overturn a 4-goal deficit in a matter of seconds.

I’m a huge fan of the Mario Strikers: Battle League gameplay, with matches generally resulting in thrilling goalfests – you’re rarely going to see any boring 0-0 scorelines here. However, I feel there aren’t enough single-player modes to make the most out of the sublime gameplay.

Cup Battles offers you the chance to fill out your trophy room, but the difficulty is extremely low and you can reach the final of each tournament by playing just two matches. It only took me a couple of hours to reach the end credits, making it feel more like a training mode rather than a fully fleshed-out single player mode.

I wish that Battle League featured a story mode in the same vein as Mario Tennis Aces, or even had the option to play a full season like Mario’s own version of the Premier League. Instead, Nintendo seems more keen to push players towards the online multiplayer mode.

Mario Strikers: Battle League offers a range of multiplayer modes, whether you’re playing locally or online. Up to eight players (4 on each team) are able to play on a single system. I unfortunately haven’t been able to invite that many people over, but I can imagine it providing a lot of chaotic fun.

If you don’t have that many friends – or a big enough living room to accommodate so many people – then you can play online instead. By opting for Quick Battle, you’re able to jump straight into a match with a rival player. I’ve had a lot of fun with these modes, with online players showing a lot more variety in playstyle compared to the CPU.

But it’s Strikers Club that will likely bring in the biggest crowd. This mode lets you set up your own team of online players, customise your chosen character and personalise your stadium, kit and club logo. You’ll be able to unlock more customisable items as you win matches too, allowing you to swap in new goalposts, stadium themes and pitch decorations – the level of customisation here is impressive.

These unlockables aren’t the only incentive for winning games, as beating opponents will also see you climb up the Division Rankings so you can secure the bragging rights for each season. I unfortunately haven’t been able to experience this for myself, as the first season won’t be kicking off until the game’s official launch.

It’s early days, and yet I still remain sceptical about the longevity of playing Mario Strikers: Battle League online. Since all the unlockable items only alter aesthetics, and there are seemingly no new characters on the horizon, I’m worried that gameplay could get stale quickly. If Nintendo wants the online modes to be the main attraction, it needs to step up its game and have a long-term content plan.

The visuals represent the biggest upgrade in Mario Strikers: Battle League compared to previous games in the series. The 3D animations look fantastic, with bright colours and detailed character models. Matches start with a dramatic view of the stadium, with a cheering crowd giving it a lively atmosphere that could rival even Barcelona’s Camp Nou.

Activating a Hyper Strike will also trigger a thrilling cutscene that’s unique to each character. Mario will perform a bicycle kick that will set the ball ablaze, while Yoshi will swallow the ball, spit it out inside a giant egg and then send it bouncing towards the goal with reckless abandon.

Nintendo has also included subtle animations for the likes of tackling, which are again unique to each character: Yoshi uses his tongue to strike other players and Donkey Kong relies on his powerful fists. It gives each character much-needed personality so they differ in more ways than just appearance.

Even the settings menus look great, with dynamic images appearing on screen as you scroll through the home menu. It all looks very slick, with the usual Nintendo polish. If I’m being picky, I would have preferred a few more game settings so I could alter the likes of the controls, as Nintendo currently doesn’t offer any in-game customisation in this regard.

Should you buy it?

If you’re looking for a new multiplayer game:

Mario Strikers: Battle League shines the brightest during the multiplayer mode, allowing you to create your own club and team up with friends to take out opponents. The upcoming season has a lot of promise with the inclusion of Division Rankings and unlockable items.

If you want a comprehensive single-player campaign:

Mario Strikers: Battle League has a very stingy offering of single players modes – there’s just one knockout cup competition, which can be completed very quickly. If you don’t intend on playing multiplayer, it’s difficult to justify the cost.

Mario Strikers: Battle League Football offers a fantastic and typical Nintendo spin on football, with thrilling gameplay and a high skill ceiling likely appealing to a large crowd. However, the lack of fleshed-out single player modes is a big disappointment, and so is only really worth the outlay if you’re willing to engage with the online multiplayer.

We play every game we review through to the end, outside of certain exceptions where getting 100% completion, like Skyrim, is close to impossible to do. When we don’t fully finish a game before reviewing it we will always alert the reader.

Tried out each mode

Kirby and the Forgotten Land Review

Is Rosalina in Mario Strikers?

Yes, Rosalina is one of the 10 characters available to play as.

Can you play Mario Strikers on Switch?

Yes, this game is only available on Nintendo Switch, Switch Lite and Switch OLED.