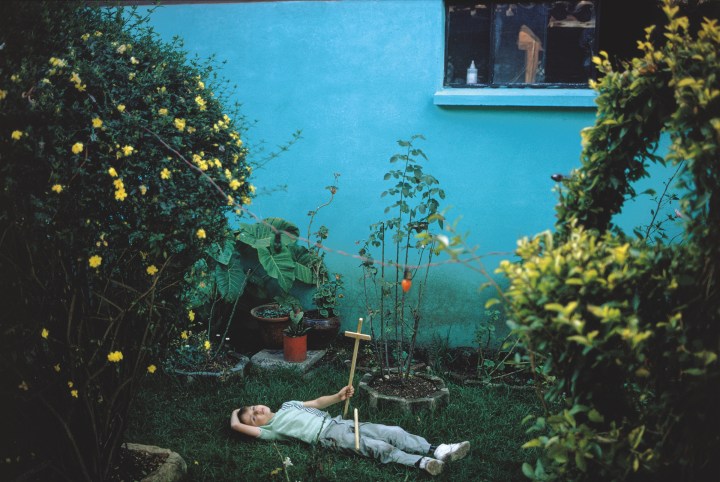 Since reading, or rather visually savoring, Joel Meyerowitz’s Wild Flowers, I’ve been thinking about how flowers are one of the most diversified emoji fields on my phone. Given the surging public interest in flowers — all plant life, really — during the pandemic, the 2021 re-release of Wild Flowers feels propitious. Out the window, I see small, budding tulips that seem more timid, or at least less theatrical, than their yellow-tipped red cousins arching from a vase on my desk.

Flipping through Meyerowitz’s photographs of “urban flora,” originally published in 1983, I can’t stop thinking of the oft-invoked Gertrude Steinism: “A rose is a rose is a rose is a rose.” Lately, I’ve been extra-conscious of flowers as accents, centerpieces, and background motifs in interior, exterior, and digital spaces. In the book, flowers appear as forearm tattoos; as subtle and lurid patterns for hats, dresses, tapestries, and curtains; as boutonnières, posies, memorial wreaths, and celebratory bouquets.

From a smiling woman sporting a towering pink, violet, and green floral fascinator to a bucket of hydrangeas perched on a New York hot dog cart and a carefully planned French garden, buds, fronds, and florets that might otherwise serve as accessories or incidental details are the leading characters in Meyerowitz’s collection. The majority of  his detail-laden color images were taken in the ‘60s and ‘70s, though a selection from subsequent decades have made it into the expanded, large format edition.

Perusing Wild Flowers feels like an elevated version of viewing a stranger’s Facebook album. Individuals, crowds, families, lovers, and sometimes simply plants appear in parks, snack bars, living rooms, church steps, and downtown and suburban streets in Massachusetts, Arizona, London, and elsewhere. In the “Afterword” Meyerowitz explains that he didn’t set out to create a collection of photographs linked by floral imagery. Reflecting on his practice of “read[ing] through my work for clues to some larger subject,” the artist notes, “I first began cultivating this garden in the 1960s while roaming the parks and cities that I lived in or visited.” Learning about Meyerowitz’s relatively uncontrived methods contextualizes the enduring freshness of the collection, wherein flowers are seen in situ and as accessories to quotidian experience rather than overly aestheticized symbols.

Meyerowitz’s unforced curation shines brightest in moments of humor and attentive observation. The significance of each bloom varies across photographs and rather than revere floral attractiveness or impermanence, readers are called to appreciate the myriad contexts. In “Cartema, Spain” (1967), a small pot with orange, geranium-like flowers hangs behind a group of older men playing dominos. A sole woman appears in a doorway holding a broom; much like the flowers, it’s unclear whether the men are aware of her, yet both plant and woman unmistakably alter the ambiance.

Heavily laden with symbolic associations, flowers, as Stein suggests, can be riddled with cliché. In recent years, flower photography has taken off on social media with designer fashion and florist collaborations that favor minimalist backdrops and pseudo-naturalistic curation. The resulting glut of smooth, aesthetically-driven digital photography makes the roughness, jubilance, and bathos of Wild Flowers all the richer. In 2021, after a year of increased fear, loss, and trepidation, flowers have continued to bloom and die, gracing public and private spaces, weddings and funerals. Never cloying, the florals in Wild Flowers are a reminder of a world that keeps growing.

Previous post June is stacked with new movies. Here are 12 to watch for.