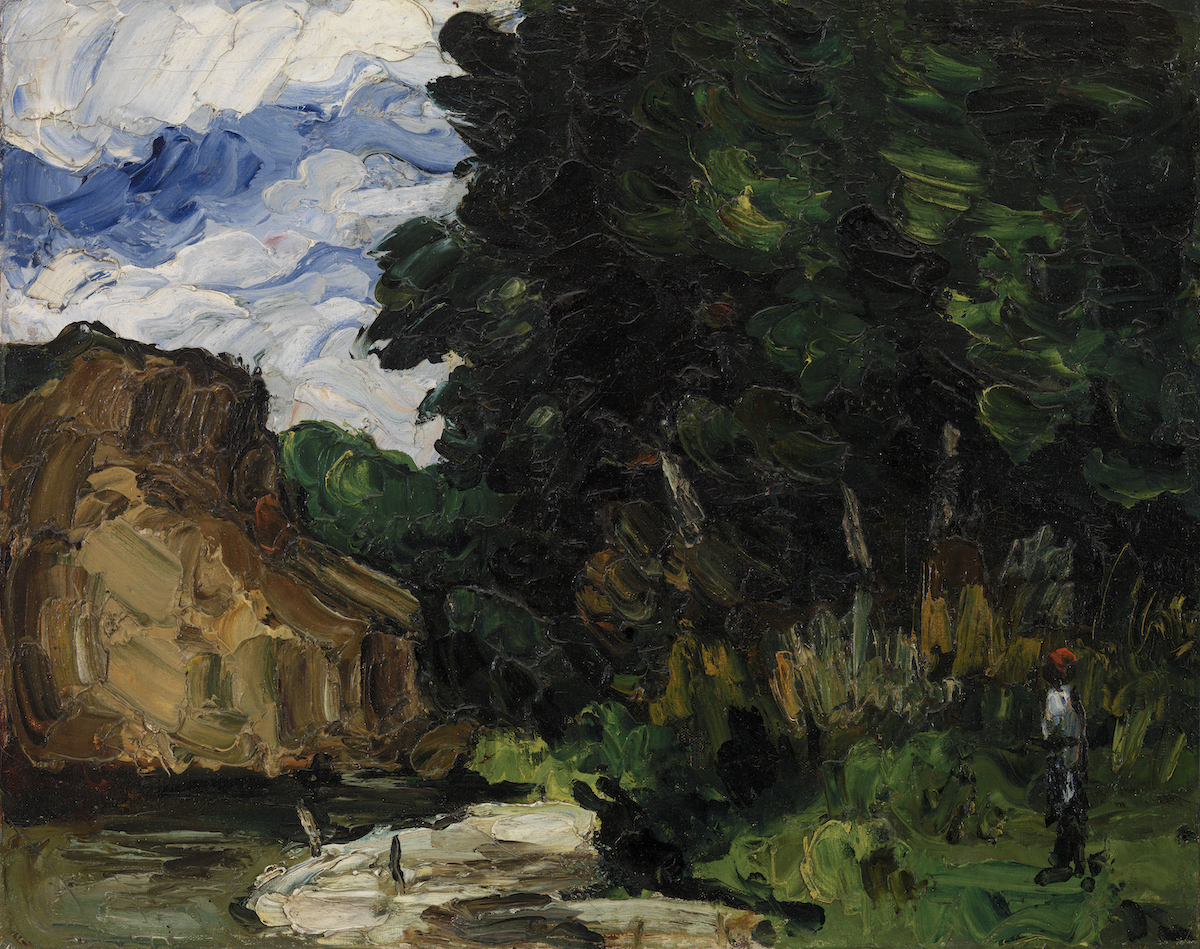 Paul Cézanne, the famed Post-Impressionist who painted a range of subjects in natural and domestic spaces, may now rank among the most celebrated artists of the 19th-century, but he didn’t always have that reputation. In fact, he was relatively obscure in the French art world until the later years of his career. Today, however, Cézanne’s masterful still lifes, landscapes, and portraits are recognized for their ineffable alchemy, which the artist often achieved through the use of skewed perspectives that alienated some critics during his lifetime. Below is a guide to the artist’s life and career, from his time under the tutelage of Pissarro to a look at some of his most notable series.

Cézanne’s father had hoped his son would become a lawyer, not an artist.
Born in Aix-en-Provence in 1839, Paul Cézanne was the first child of Louis-Auguste Cézanne, a successful banker. His father wanted him to pursue a career as a lawyer, but Cézanne had cultivated creative ambitions early on in his youth. Starting in 1857, the artist took classes at a drawing school attached to the Musée d’Aix (now known as the Musée Granet), and one of his childhood friends was the writer Émile Zola.

He did a two-year stint at law school that ended in 1861, at which time he began visiting Zola in Paris and immersing himself in the city’s art world. The following year, Cézanne moved to the French capital to study at the Académie Suisse, where he would meet the painter Camille Pissarro, who influenced Cézanne’s practice, style, and techniques. Cézanne was also deeply impacted by the Old Masters paintings he encountered at the Louvre, as well as works by Eugène Delacroix and Gustave Courbet.

The artist faced difficulty getting his career off the ground after he completed his studies.
In the years after he graduated from the Académie Suisse, Cézanne foregrounded figurative works and portraiture in his practice, with Zola and members of the Cézanne family among some of his subjects. During this time, he was rejected from the École des Beaux-Arts, and his works were not included in Salon exhibitions—then the most important group exhibitions in Paris—on account of their aggressive brushstrokes and overwhelmingly dark palettes. Disillusioned by these prospects, the artist began splitting his time between Paris sand Aix-en-Provence, whose natural landscape would figure in his paintings. In 1869, he met Émilie Hortense Ficquet, whom he would marry in 1886.

Pissarro helped Cézanne usher in a new phase of his practice in the early 1870s.
Pissarro had a major impact on Cézanne’s oeuvre, introducing the artist to plein air painting techniques and shifting his focus to more vibrantly colored rural landscape scenes in the early 1870s. In 1872, the same year Cézanne’s son, Paul, was born, he moved to Auvers-sur-Oise, where van Gogh would famously lived and work in the months leading up to his death in 1890. There, Cézanne’s work took on a more Impressionistic style, and the contemplative works he completed in Auvers would be shown at Impressionist exhibitions in Paris in 1874 and 1877. In this period, Cézanne also nurtured his interest in still life painting. One of his works from this time, titled Still Life Post, Bottle, Cup and Fruit (1871), is reflective of Cézanne’s most recognizable paintings of elegantly arranged, plump apples. In this work, as well as many others from the era, Cézanne emphasized shading, leaving certain areas of canvas exposed where light bounced off a curtain or a jug—a daring gesture at the time.

Cézanne’s friendships disintegrate in the following decade.
Cézanne ceased working with Pissarro after 1882 and went on to spend much of his time outside of Paris. He painted some of his most famous sea views in the port town of L’Estaque, in the south of France, near Marseille. One such work, L’Estaque with Red Roofs (1885), shows the vividly blue ocean beyond the clusters of sun dappled buildings in the coastal town. Throughout the decade, the artist continued rendering portraits, still lifes, scenes of bathers, and images based on classical mythology, with the ancient Greek tale of Leda and the Swan acting as one of his recurring subjects. Not too long after, he lost a good friend in 1886, when Zola published his novel The Masterpiece (L’Oeuvre), which focuses on a struggling, largely unsuccessful artist named Claude Lantier. Many took notice of the fact that Lantier shared a number of traits with Cézanne, including a preference for painting outdoors. Annoyed by the unflattering representation of himself, the artist severed ties with Zola.

Cézanne received little acclaim until the 1890s, when he got his first solo exhibition.
Cézanne’s dealer, the influential Paris gallerist Ambroise Vollard, organized the artist’s first solo show in 1895, and his work subsequently began drawing attention from premier writers who had previously ignored it, including Joris-Karl Huysmans, Bernard Berenson, and George Lecomte. A few years prior to that landmark showing, the artist had completed a series of paintings of Provençal peasants seated in groups and playing cards. The artist would return to those figures in the early 20th century, creating intimate portraits of men situated in muted, austere spaces or standing against a backdrop of painterly trees.

In the final years of his life, Cézanne creates his famous series focused on Mont Sainte-Victoire.
From a studio he built in Les Lauves in Aix-en-Provence in 1902, Cézanne made his series of paintings of Mont Sainte-Victoire, which now are considered some of his most iconic works. Represented from various points of view and rendered in shades of purple, green, and blue that unlooked unlike life itself, Mont Sainte-Victoire and its environs took on different moods depending on the color palette used. With his proto-Cubist forms, depicted as though seen from multiple perspectives at once, Cézanne could use gray clouds around the mountain, for example, to hint at a placid atmosphere. As with his previous landscapes, Cézanne set out to explore the ways that nature can shape shift before one’s eyes in the Mont Sainte-Victoire paintings, many of which he made between 1904 and 1906, the year of his death. In 1907, exhibitions of Cézanne’s work at the Galerie Bernheim-Jeune and the Salon d’Automne in Paris celebrated the artistic achievements of his career. After years of having gone virtually unnoticed, Cézanne was written into art history at long last. Today, his works can be found in some of the world’s most august art institutions, including the Metropolitan Museum of Art and the Museum of Modern Art in New York, the Musée d’Orsay in Paris, the National Gallery in London, and elsewhere.

Previous post One Good Thing: All Creatures Great and Small is cozy as a mug of tea on a rainy day