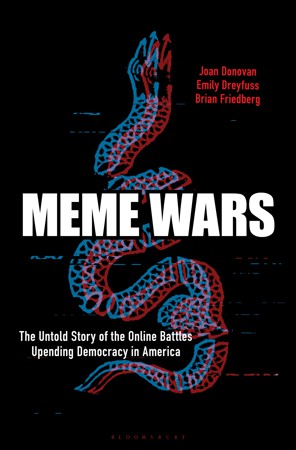 “We’re storming the Capitol! It’s a revolution!” a woman who identified herself only as Elizabeth from Knoxville, Tennessee, told a reporter outside the U.S. Capitol on January 6, 2021. She had a blue Trump flag slung across her neck like a cape. Police had just maced her in the face, she recounted through tears.

As soon as this video of Elizabeth hit Twitter, it went viral. The insurrection she’d taken part in, a very real and coordinated attempt to thwart the democratic process, was also a surreal spectacle—millions watched the chaos unfold in real time on broadcast TV and on social media—and Elizabeth was one of the minor characters. On Twitter and TikTok, she became fodder for internet jokes. People remixed the video with Auto-Tune. Sleuths spun conspiracy theories: Maybe Elizabeth was a liar who hadn’t really been maced. Maybe the insurrection was a hoax. Content was crafted to fit different political orientations and different platforms, and to delight or offend different audiences.

In short: Elizabeth from Knoxville had been memed. No longer a person with a real identity, now she was a memorable piece of media. The video clip of her was recontextualized, remixed, and redistributed, carrying all sorts of meaning. That’s the definition of a meme: a resonant, authorless idea that spreads through culture, evolving with every hand that touches it. First coined by the biologist Richard Dawkins in his 1976 book, The Selfish Gene, memes are now thought of mostly as images online with a bit of text over them. These are a specific type, known as an image-macro meme, but memes can also be phrases (“Trump Nation”), slogans (“Stop the Steal”), gestures (“the dab”), numbers, hashtags—the list goes on.

In the politics of the 21st century, political memes are some of the most powerful tools a person or group can use to spread their message. Memes like “Make America great again” helped bring Elizabeth to D.C. in the first place, as did memes like “1776!,” which people had been sharing as hashtags and chanting at rallies to indicate that this January day was, as Elizabeth had said, a revolution. Amid the chaos, flags told the story. As Elizabeth cried into the camera, her fellow rioters walked into the frame carrying American flags, MAGA flags, Trump flags, and the familiar Gadsden flag, a yellow banner with a coiled rattlesnake hissing the warning “Don’t Tread on Me.” All of these were memes.

The central idea animating the insurrection—that Trump had been denied his rightful victory in the election—was itself a memetic slogan, #StopTheSteal, which had been hashtagged, printed on T-shirts, and adopted by politicians and millions of voters. In three short words, #StopTheSteal managed to convey the complicated idea that Joe Biden was an illegitimate president and Donald Trump had been wronged by a powerful system intent on subverting the will of the people. Declaring it announced membership in the MAGA community.

On January 6, pundits and people across America and the globe were shocked by what they saw. How could this be happening? How had we gotten to this point? What the hell was going on in American society? As researchers studying media manipulation at Harvard University’s Shorenstein Center on Media, Politics, and Public Policy, we were not surprised. We’d spent all of 2020 tracking memes like the anti-Asian dog whistle #ChinaVirus, which Trump championed as a way to deflect criticism about his handling of COVID and to position the pandemic as a sort of war against a geopolitical rival. We are far from alone; there is a wide community of internet researchers, journalists, and civil-society organizations who watch memes and online fringe communities closely. For us, the events of that day were entirely foreseeable. They were tragic. But they were not unexpected.

[Read: How memes, lulz, and “ironic” bigotry won the internet]

It was a meme war that spilled into the streets of Washington, D.C., that day in January 2021. Meme wars are culture wars that have been accelerated and intensified by the infrastructure and incentives of the internet, which trades outrage and extremity as currency, rewards speed and scale, and flattens the experience of the world, eliminating patience, kindness, and understanding. They are launched online by people with an agenda, and when one is successful, it captures the attention of a lot of other people who feel that the meme lines up with who they are, what they stand for, and whom or what they are against.

A decade of meme wars has radicalized people, and a president who understood the power of meme wars was able to send a tweet (“Big protest in D.C. on January 6th. Be there. Will be wild!”) that drafted thousands into a battle against democracy itself. Though the insurrection failed, and Biden was inaugurated as president, the success of the online warfare that led to the insurrection is evidenced by the sheer fact that January 6 happened at all. Meme wars aim to bring the energy of an online community into the real world.

By that measure, these meme wars have been tremendously successful, shaping the past decade of U.S. politics, even as they have largely ruined the lives of the people who directly engage in them. The most powerful warriors now face indictment, prison, bankruptcy, and loss of family and identity, but their ideas, carried into the bloodstream of our society through memes, persist: Learn to code. It’s about ethics in journalism. Race is real. It’s okay to be white. Critical race theory. Let’s go, Brandon. Blue Lives Matter. A deep state operates extralegally inside the U.S. government.

But social media did not create culture wars. Instead, we’ve found, social media did to culture wars what spinach did to Popeye—it juiced them up. Suddenly you didn’t need a radio show to get your idea to millions of people. You just needed a viral tweet, or to figure out the desires of a Facebook algorithm programmed to boost outrageous and emotionally stirring content. With the scale and ease of social media, culture warriors from across the country and globe were able to find one another and gather in communal spaces where their ideas could grow.

The design of our communication infrastructure makes it easy for us to share political memes, but culture explains why we share what we share. Memes establish an in-group and an out-group—they are inside jokes, in a way—and you know which group you fall into based on whether you feel attacked or affirmed (or totally confused) by their message. Memes are easy ways for people to signal their cultural affinity. The ones that resonate most are those that tap into some already established norm or belief and introduce a new twist or idea that expresses complex aspects of that belief in an extremely simplified way. This makes sharing memes on social media the perfect mechanism for moving politically fringe ideas toward the mainstream over time. We describe this as “going from the wires to the weeds,” where interactions online (in the wires) affect behavior in the real world (the weeds).

[Read: The internet won’t be the same after Trump]

The 2020 election illustrated that social media could be turned against U.S. democracy when wielded by domestic political actors who understand how to use it to make their ideas go from the wires to the weeds. Trump was the first president to fully adopt meme wars as a campaign and governing strategy. He retweeted memes, amplified the voices of devoted meme warriors, adopted into his official campaign materials memes that had been workshopped on 4chan, and frequently behaved as a “general in the meme wars,” a title some of his once-most-devout supporters (including his son Donald Jr.) gave themselves. At the end of his long speech from the Ellipse on the morning of January 6, a speech filled with references to memes such as “America First” and “China virus,” Trump told the assembled crowd to march to the Capitol. “We fight,” he declared. “We fight like hell, and if you don’t fight like hell, you’re not going to have a country anymore.” With that, Trump proved that memes can run real-life American politics, and mobilize large groups of people to action. And when those people are fed a steady stream of violence, aggression, and fear, the results can nearly take down a nation.

This article has been excerpted from Joan Donovan, Emily Dreyfuss, and Brian Friedberg’s forthcoming book, Meme Wars: The Untold Story of the Online Battles Upending Democracy in America.