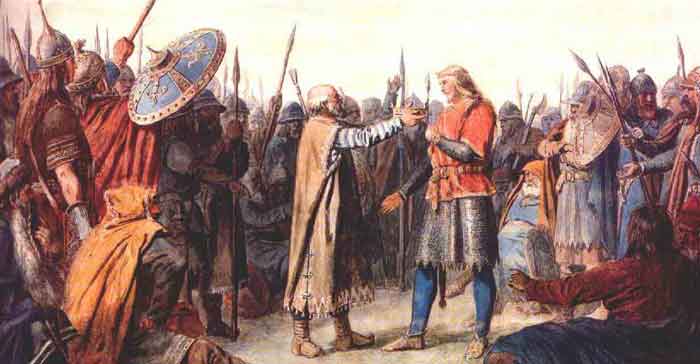 Today we refer to Viking Age Scandinavians generally as Vikings as though they were one group. But the people known as Vikings weren’t an entirely homogeneous mass of people. There were Norwegian Vikings, Danish Vikings and Swedish Vikings (We won’t have a separate category for the Icelanders since they were originally Norwegian, after all, and didn’t really go Viking like their counterparts eastward did, they also developed a more settled society.

But here are the following problems that makes this claim really difficult to dispute over. First to start the early viking raids don’t have the right sources, there are low or even none written sources showing the early raids of the vikings from these regions. The second is that they weren’t united like today into states so it would be harder to know which tribe or what raid came from. The tribes and earldoms were in constant conflict and it’s hard to follow who owned and occupied who. We know that they spoke the same language, however there would’ve been some change due to geography; mountains between Norway and Sweden, water between the Nordic countries and Denmark. So it’s safe to say that they were a big culture that was regionally divided.

The Danish Vikings or also known as Danes were the most politically organized out of their other Viking Cousins, which is why Danish kings had a much larger role in Viking invasions long before Norwegian/Swedish Vikings. The Danes were the strongest of the Norsemen both in political and military power, and they also were the first of the three to be fully converted religiously into Christians (almost entirely by the end of 9th century).

They wanted to discover and pillage the western part of the world, so their focus was put on France, England, and the Mediterranean parts of the world. The Danes were the “vikings”. While the others didn’t raid that much they were traders and explorers. The bulk of the raids came from Denmark, Southern Norway and Sweden – basically the area around the Kattegat and Skagerakk sea areas.

The Norwegian Vikings were utterly crazed warriors. Almost all Vikings who used axes in combat were from the Norwegian part, as far as the archeological evidence allows. The Norwegians were the best boat builders and sailors of the lot. The Norwegians remained pagan for a while, not so long as the Swedes, but still respectably so.
The Norwegians may be said to be, if not the bravest of the three, then at least the most pioneering and adventurous sailing to Iceland, Greenland, and then what would later become America is astonishing.

The Swedes, then known as Varangians, or Rus. They are very interesting because out of the three they were the ones who stayed true to their pagan ways for the longest. (until early 12th century). They were poised to discover and pillage new lands in the east along the Volga and Dnieper rivers. Their expeditions, however, were of a different sort than the Danes and Norwegians in the west. They were excellent explorers and tradesmen, but simply not as violent as the others (in relative terms, of course they terrorized many primitives along the Baltic) The goal of the Rus was primarily to trade (or so we think). They established long trade routes to the middle east and around the Black Sea.

By Alcibiades / This article was originally posted on About-History.com