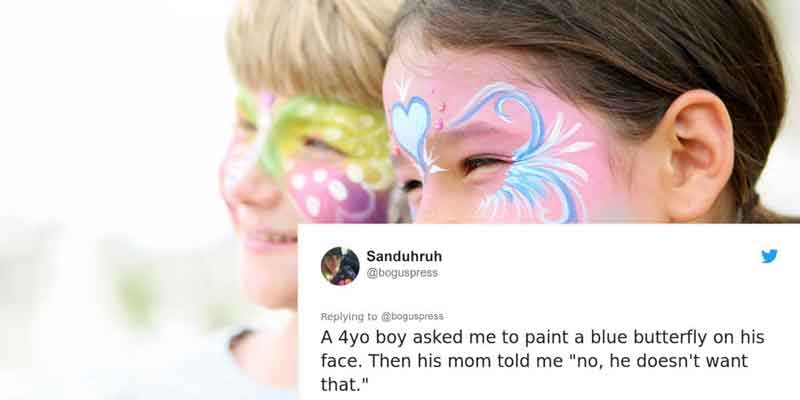 From a young age, children learn to conform to gender norms, which isn’t always helpful or necessary.

It seems so simple to just let kids be kids, but society doesn’t make that easy. From early infancy, children are taught an extremely binary interpretation of gender than informs their life choices.

Sometimes this can get really out of hand. Twitter user Sandra, who works as a clown, shared a heart breaking experience she witnessed that displays the problem with rigid gender norms.

The story was originally told in 2017, but has once again gone viral, with a message as important today as it was back then.

During a picnic, a boy requested that she paint a blue butterfly on his face, but his mother objected, demanding that Sandra paint something more “masculine”. After the incident, Sandra took to Twitter to convey her unease over this kind of behaviour and the damaging impact it can have on children in later life. Specifically, she highlighted that expecting men to be tough from a young age can lead to a culture of violence.

Giving an update on the story, Sandra tweeted that the boy’s mother complained to her boss.

Excuse us, we’ve got something in our eye.

Posted by Louis Staples  / this article was originally published on Indy100.com