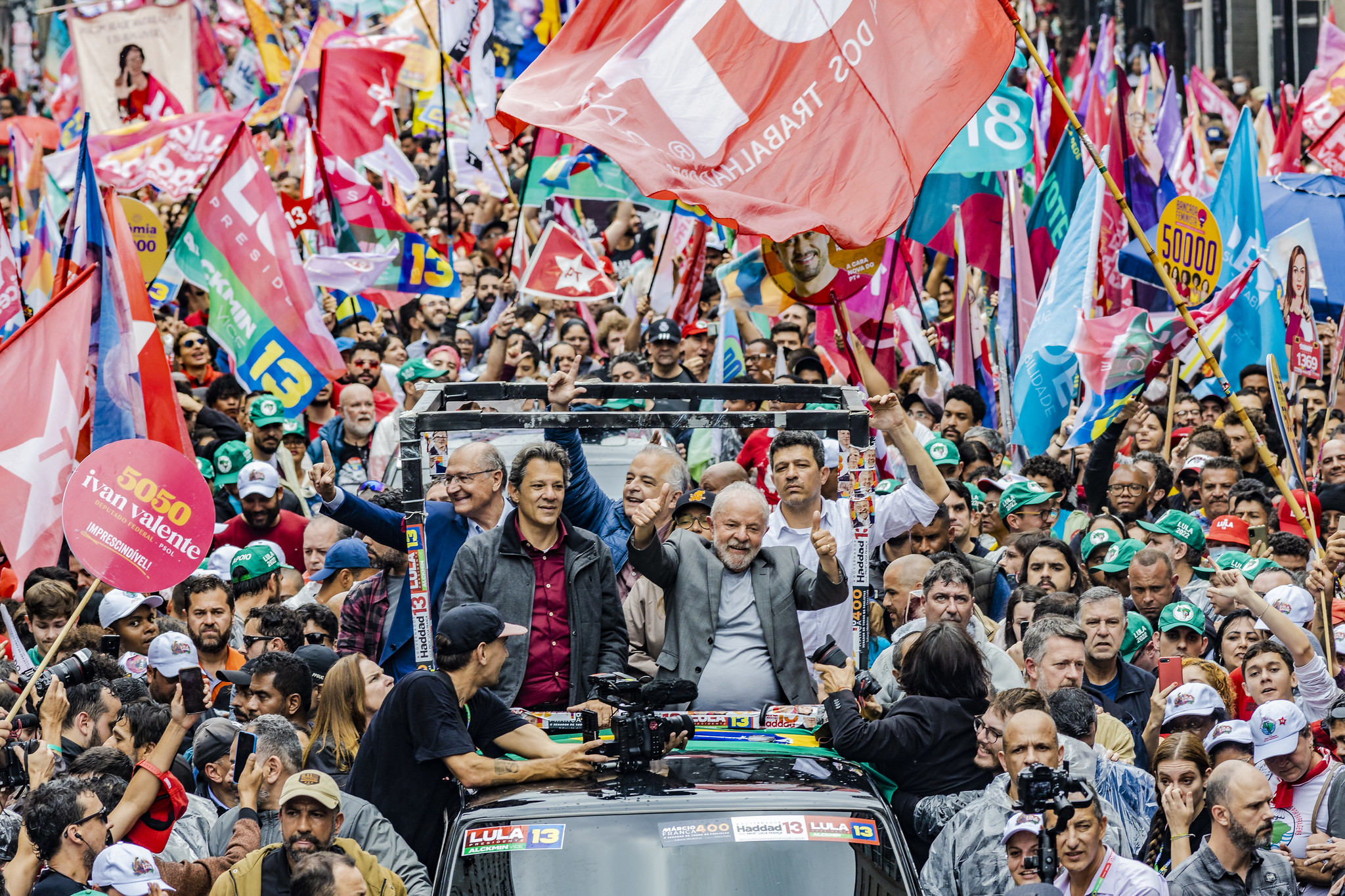 On 30 October, Brazilians took part in one of the most fiercely contested presidential elections in their country’s  history. It divided the country right down the middle:, Luiz Inácio Lula da Silva (Workers Party) received more than 60.3 million votes (50.9%), winning the support of more voters than any president in the history of Brazil, defeating the incumbent Jair Bolsonaro (Liberal Party), who was seeking four more years in power.

“Democracy has spoken in Brazil”, wrote the French newspaper Le Monde. For many, it was the victory of respect for democracy, against the intolerance represented by the extreme right personified in Bolsonaro.

I have been living in the United Kingdom since 2020 but travelled to Brazil a few days before the first round of the elections, which took place on 2 October. I was able to vote in both rounds and was glad to do so, as I believe we don’t vote only for ourselves. Voting is a collective action, especially in Brazil, where it has been mandatory since 1932. It is also easy and quick, as we vote using electronic machines where we type the candidate’s number, press confirm and it’s done. That’s why the counting of votes in Brazil is fast and allows the country to announce the results on the same day.

As soon as I arrived in my home town of Curitiba, in the south of Brazil, I noticed people were getting ready for the elections. Many homes and cars were decorated with Brazil’s flag, a sign of support for current president Jair Bolsonaro. Although in smaller numbers, I could also see people backing Lula, especially in pubs and neighbourhoods linked to the left-wing. This support for Bolsonaro was evident in the final results: in the second round, Bolsonaro won 720,322 votes in Curitiba, while Lula won 391,675. Curitiba is not alone in being pro-Bolsonaro; the incumbent president enjoyed some of his strongest support in the white-majority southern state of Paraná in which it is located. But the North East of Brazil, where he obtained 69% of the vote, proved decisive for Lula’s victory.

Throughout the presidential race, Bolsonaro tried to delegitimise the electoral process. More than once, the outgoing president tried to discredit the electronic voting machines, which make the elections in Brazil one of the most transparent and safest in the world The legitimacy of the elections was confirmed by international observers from the Organisation of American States. In the week before the second round, Bolsonaro said that without the presence of the Armed Forces it would be impossible to give a stamp of credibility to electronic voting machines. His supporters, encouraged by his anti-democratic speeches, pushed for a return to printed voting papers, where the possibility of fraud is higher.

As the elections approached, knowing his chances of re-election were diminishing, Bolsonaro began to take populist measures, such as increasing the value of Auxílio Brasil (Brazil’s social assistance programme) and lowering the price of petrol. Even so, Bolsonaro became the first president to fail to be reelected since reelection was instituted in 1997.

Historically in Brazil, the defeated candidate calls the winner on the same day the results are announced, wishing the future president luck, as well as making a statement to the press, recognising the result and respecting democracy. This was the first time that the defeated candidate had not spoken right after the result was confirmed since the adoption of electronic voting machines in the presidential elections of 1998. Bolsonaro broke his silence two days later, saying that as president, he would continue to respect Brazil’s Constitution. He did not mention his rival Lula and didn’t answer questions from journalists. Lula’s victory signals Brazil’s return to the international stage at a time of global crisis. The Guardian wrote that “his victory over the current right-wing extremist, Jair Bolsonaro, is also good for the world”. Norway has already announced that it will once again send financial resources in the fight against deforestation of the Amazon l, as Lula reinforced during his campaign the importance of preserving the rainforest and the lives of indigenous peoples. UK Prime Minister Rishi Sunak congratulated Lula on his victory and said he wanted to work together with Brazil to strengthen the global economy and promote democratic values. Joe Biden also sent his congratulations to the future Brazilian president and stressed that the elections were fair and free. Emmanuel Macron said that Lula’s election opens a new page in the country’s history and wants to join forces to renew the bond of friendship between France and Brazil.

Since the beginning of his term in 2019, Bolsonaro has tried in every way to divide the country and promote hatred. Families have been fighting over politics and bonds have been broken because people can’t stand the other side anymore. When Bolsonaro took over the presidency, he said that minorities would have to bow to the majority. Lula, shortly after being officially declared the next President of the Republic, said that as of January 2023 he will govern for 215 million Brazilians and not just for those who voted for him.

“There are not two ‘Brazils’. We are one country, one people, one great nation,” said the president-elect.

As for freedom of expression and the press, it is expected that Lula’s victory will improve both. Many Brazilians opposed to Bolsonaro have not expressed support for their preferred candidates for fear of reprisal and violence. It was not uncommon for Lula supporters to be physically attacked or even killed, as in the case of Marcelo Arruda, treasurer of the Workers Party, who was shot dead in Foz do Iguaçu, at his own birthday party, by a supporter of Jair Bolsonaro. Likewise, journalists were constantly attacked by Bolsonaro in his speeches.

Shortly after Lula’s victory was announced, Bolsonaro supporters began to demonstrate on the country’s roads and introduced illegal blockades on 227 federal highways, in protest against the election results and asking for military intervention and new elections. The newspaper O Estado de São Paulo reported, on Telegram, that groups who support Bolsonaro claim to be at war against Communism and that they will use violence if needed. Some protesters were seen using Nazi salutes. On Tuesday, 1 November, the Federal Court of Justice ordered the unblocking of the occupied highways. One day later, Bolsonaro asked everyone to clear the highways, saying he believed this was not a legitimate demonstration.

Bolsonaro’s legacy is clear. Almost 700,000 deaths from the Covid-19 pandemic, disrespect for science, more than 33 million Brazilians going hungry, support for the 1964 military coup and a contempt for democracy and freedom of expression. On the night of 30 October, thousands of people headed to Avenida Paulista, one of the most important in the city of São Paulo, to celebrate Lula’s victory and await the future president.

“This country needs peace and unity,” Lula said. The front cover of O Estado de São Paulo quoted one of Lula’s phrases after his triumph: “time to put down our weapons”. The hope is that Lula will once again bring international respect to Brazil.

You may also wish to read
See all

“Imagine the conversation between Bolsonaro and Erdogan”
16 Sep 2022

The post Can a familiar face herald a new start in Brazil? appeared first on Index on Censorship.