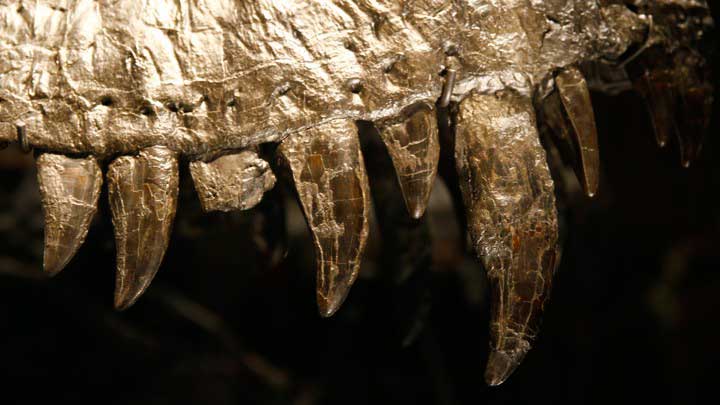 The discovery of modern microbes in a deeply buried fossil has complicated an already tangled dispute in paleontology.

Around 76 million years ago, a massive herd of the horned dinosaur Centrosaurus died in what is now Alberta, Canada. While they were still alive, these creatures, like all other animals, would have had trillions of microbes living inside their bodies and on their skin. And even now, long after their demise, their remains still harbor life.

Within pieces of fossilized bone from a newly uncovered Centrosaurus, scientists led by Evan Saitta from the Field Museum have found a thriving community of unusual bacteria. These aren’t ancient microbes, but modern ones that infiltrated the fossils and survived on the water and minerals inside them. “The bones provide a refuge,” Saitta says. They are porous, and so “have space for the microbes to proliferate. They’re full of phosphate and iron. They can wick up moisture.”

When animals die, waves of microbes consume their corpses. Scientists have looked at how this “necrobiome” changes over the hours and days after an animal perishes. But Saitta’s work suggests that microbes continue to colonize cadavers long after their flesh has decayed, after their bones have turned to stone, and after they’ve been buried several miles deep for millions of years.

That came as a huge surprise to Tullis Onstott, a microbiologist from Princeton who worked with Saitta, and who always thought of fossils as inert and inanimate. “I thought that dinosaur bone must be some kind of sealed sarcophagus,” he says. “It’s not, by any means. It’s basically a condo for bacteria. Now the question becomes: Is this true for all dinosaur bones?”

The team’s study, which has been uploaded as a preprint and has yet to be reviewed and published, complicates a heated debate that has rocked the world of paleontology for more than a decade. In the mid-2000s, Mary Schweitzer from North Carolina State University reportedly found blood vessels, cells, and traces of collagen protein from the thigh bones of two dinosaurs: a 68-million-year-old Tyrannosaurus and an 80-million-year-old Brachylophosaurus. Though a far cry from Jurassic Park, since no DNA had been discovered, the discovery was still an extraordinary one. If proteins really could survive that long, they would allow scientists to study dinosaurs at a molecular level, just as they do modern animals.

Others were skeptical. Most ancient proteins are hundreds of thousands of years old at most. A few exceptional molecules have lasted for 3 to 4 million years, protected either by exceptional cold or unique minerals. The supposed collagen from Schweitzer’s dinosaurs enjoyed no such protection, and would have been 20 to 30 times more ancient. Collagen is tough, but after such a long time, the chemical bonds that hold it together would likely have ruptured. Some critics argued that the proteins Schweitzer had detected weren’t actually there, or that the cells she had seen were actually bacterial colonies. Others suggested that the molecules and tissues must have come from modern organisms that contaminated the samples.

Schweitzer’s team addresses that last critique by taking extra care to stop external microbes from getting into its fossils. When it recently reanalyzed fragments from its Brachylophosaurus, the team even disassembled one of its analytical instruments and soaked its pieces in alcohol to kill any contaminating microbes.

But based on his new findings, Saitta now argues that such measures wouldn’t have done anything to remove microbes living inside the bones themselves. And if such microbes prove to be common, researchers must take extra steps to prove that proteins in a dinosaur’s bone actually belonged to the animal itself, and not to modern microbes that have infiltrated its remains.His team tried to do that with their Centrosaurus specimen. Like Schweitzer’s group, it took care to stop foreign microbes from landing in the samples. The scientists washed their gloves and face masks in alcohol. They sterilized their tools with bleach and a blowtorch. They extracted bones that were still encased in mudstone and wrapped them in sterilized foil. “Collecting bones aseptically is basically an impossible task because the techniques of paleontology haven’t changed in the last 100 years, but I think we did a good job,” Saitta says.

Once in its laboratory, the team pulverized the bone fragments and subjected them to a battery of chemical tests. And while it found plenty of amino acids—the building blocks of proteins—the profile of these molecules didn’t match collagen. And they weren’t ancient. When living things die, their amino acids gradually flip into a mirror-image state. By measuring the levels of these flipped versions, scientists can deduce how old proteins are. Those in the Centrosaurus were clearly modern. They likely came from microbes, and given the team’s diligence, those microbes likely came from inside the bones.The team found 50 times more microbial DNA within the bone fragments than in the mudstone immediately surrounding them. It could even see some of the cells under a microscope. “The concentration of bacteria in the bone was huge,” Onstott says. “There’s a very significant community in there.”

This microbial community is dominated by just a few bacterial species that are very different than those in the surrounding sediment. Their exact identity is unclear, but around a third of the DNA is a close match for Euzebya, a bacterium that’s been found in Etruscan tombs and in the skins of Japanese sea cucumbers. “It’s not something I’ve widely encountered, so we’re trying to figure out what they are,” Onstott says. “There seems to be something in the bone that enhances this particular type of bacteria.”

“It’s slightly odd that no one’s ever tried this before,” says Matthew Collins from the University of York, who studies ancient proteins. Despite the collagen controversy, no one had looked directly for microbes inside the bones, and “surprise, surprise! There are microbes present. It doesn’t disprove that researchers can get [original] proteins out of these dinosaur tissues, but it does cast shade on the interpretation.”

Saitta and some of his colleagues take a harder line. They couldn’t find any trace of ancient proteins in the Centrosaurus bones, which contradicts Schweitzer’s discovery, or at least fails to replicate it. And since many bacteria can digest collagen, they say that the presence of microbes in bone makes it even less likely that ancient proteins would have survived for tens of millions of years.

Others feel less strongly. Onstott notes that other dinosaur bones might have no microbes at all, or different communities of them. Some might contain species that help to preserve collagen over time. “I think the discovery of Cretaceous dinosaur proteins is still tentative, and we still don’t have clear, unquestionable evidence,” adds Enrico Cappellini from the University of Copenhagen. Nor is it clear, he says, that chemical signals that have been interpreted as dinosaur proteins came from bacteria.

Schweitzer doesn’t think that the new study contradicts her work, either. “We never claimed that our bones have been preserved without a microbial influence,” she says. That influence is neither surprising nor “mutually exclusive” with the preservation of actual dinosaur proteins—“a claim we support with multiple lines of evidence, rigorous data, and a plethora of controls.”

Her team has used several techniques that Saitta’s group did not, and that provide stronger evidence that its tissues and proteins couldn’t have come from microbes. For example, it sequenced the proteins in question using mass spectrometry, and found matches to vertebrate proteins. It also showed that these tissues react to antibodies that specifically recognize vertebrate proteins not found in bacteria. Saitta and his colleagues “have not addressed these multiple lines of evidence, so they haven’t refuted any of our hypotheses or negated any of our data,” she says.

Her team also recently inoculated modern bones with bacteria and showed that the resulting colonies are very different, structurally and chemically, from the cells and blood vessels she has seen in dinosaur fossils. “There are no data to support a microbial source for the vessels and [bone cells] we have recovered,” she says. “But there are abundant data to support that these are original to the dinosaur.”

And so the debate continues. “I think it has ultimately been good for the field,” says Beatrice Demarchi from the University of York. She means that scientists who are searching fossils for traces of ancient molecules have had to think hard about how to prove that their finds are authentic. Many of the techniques that they’ve adopted “should be applied routinely,” Demarchi says, “and even more so when claims for really old proteins are made.”

The debate has often been acrimonious, and Saitta hopes to avoid that this time round. “I don’t want to create any animosity. I just want to do good science,” he says. “There’s a lot of interesting things going on in these bones, and if not for the dinosaur-protein claims, I wouldn’t have thought to look into them.”

By Ed Yong / This article was originally published on TheAtlantic.com