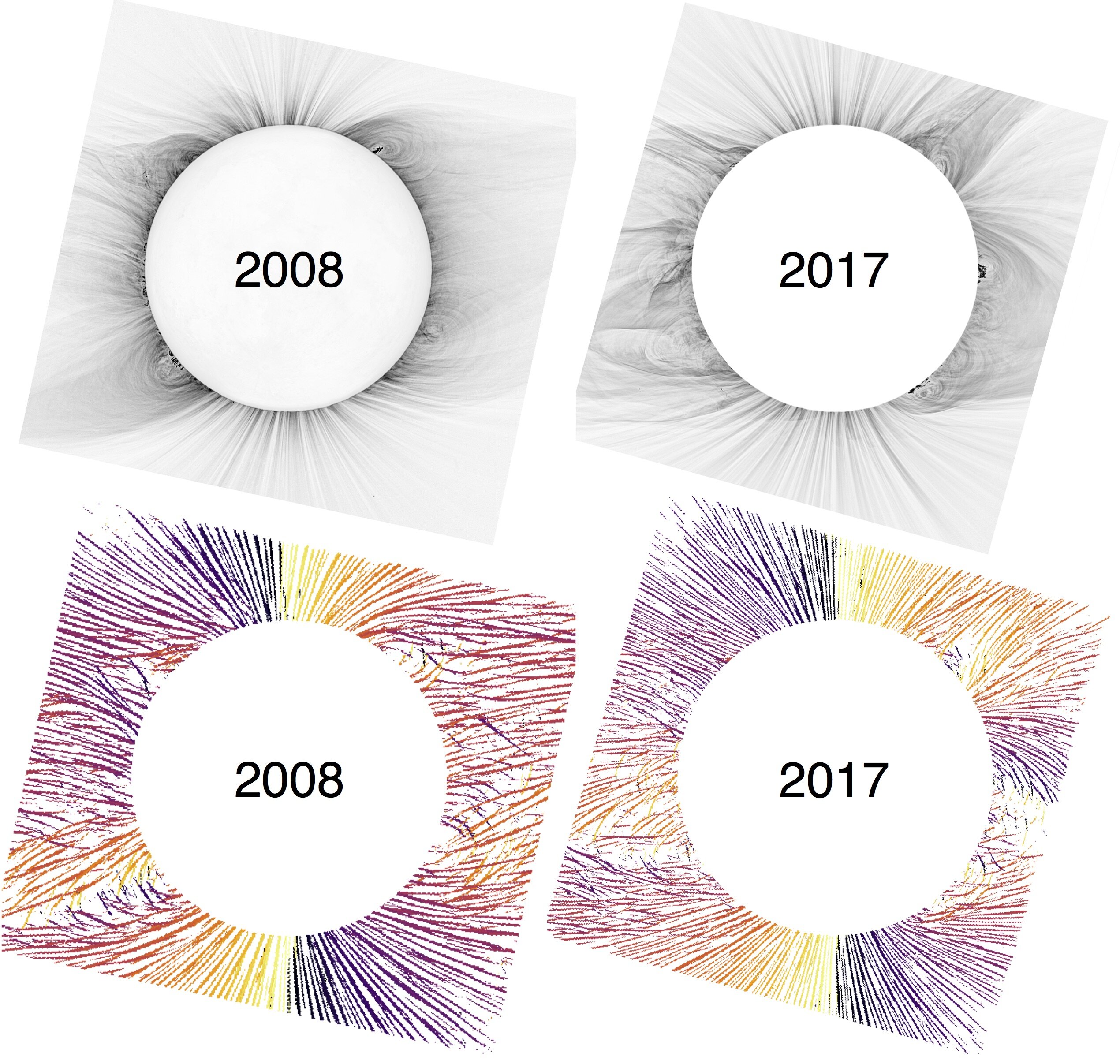 High-resolution images of the solar corona. The top panels show the visible light (color inverted), while the lower panels show the magnetic field shape. Fine details, quantified for the first time, are visible throughout the corona. Credit: B. Boe/IfA
While the world has been dealing with the coronavirus pandemic, researchers at the University of Hawaiʻi Institute for Astronomy (IfA) have been hard at work studying the solar corona, the outermost atmosphere of the sun which expands into interplanetary space. This stream of charged particles radiating from the surface of the sun is called the solar wind and expands to fill the entire solar system.

The properties of the solar corona are a consequence of the sun’s complex magnetic field, which is produced in the solar interior and extends outward. A new study by IfA graduate student Benjamin Boe, published Wednesday, June 3rd in the Astrophysical Journal, used total solar eclipse observations to measure the shape of the coronal magnetic field with higher spatial resolution and over a larger area than ever before.

The corona is most easily seen during a total solar eclipse—when the moon is directly between the Earth and the sun, blocking the bright surface of the sun. Significant technological advances in recent decades have shifted much of the focus to space-based observations at wavelengths of light not accessible from the ground, or to large ground-based telescopes such as the Daniel K. Inouye Solar Telescope on Maui. Despite these advances, some aspects of the corona can only be studied during total solar eclipses.

That is why Boe’s advisor and coronal research expert, Shadia Habbal, has led a group of eclipse chasers making scientific observations during solar eclipses for over 20 years. The so-called “solar wind sherpas” travel the globe chasing total solar eclipses, transporting sensitive scientific instruments on planes, helicopters, cars, and even horses to reach the optimal locations. These solar eclipse observations have led to breakthroughs in unveiling some of the secrets of the physical processes defining the corona.

“The corona has been observed with total solar eclipses for well over a century, but never before had eclipse images been used to quantify its magnetic field structure,” explained Boe, “I knew it would be possible to extract a lot more information by applying modern image processing techniques to solar eclipse data.” Boe traced the pattern of the distribution of magnetic field lines in the corona, using an automatic tracing method applied to images of the corona taken during 14 eclipses across the past two decades. This data provided the chance to study the changes in the corona over two 11-year magnetic cycles of the sun.

Boe found that the pattern of the coronal magnetic field lines is highly structured, with structures seen at size scales down to the resolution limit of the cameras used for the observations. He also saw the pattern changing with time. To quantify these changes, Boe measured the magnetic field angle relative relative to the sun’s surface.

During periods of minimum solar activity, the corona’s field emanated almost straight out of the sun near the equator and poles, while it came out at a variety of angles at mid-latitudes. During the solar activity maximum, on the other hand, the coronal magnetic field was far less organized and more radial.

“We knew there would be changes over the solar cycle,” remarked Boe, “but we never expected how extended and structured the coronal field would be. Future models will have to explain these features in order to fully understand the coronal magnetic field.”

This work has further implications in other areas of solar research, including the formation of the solar wind, which impacts the Earth’s magnetic field and can have effects on the ground, such as power outages.

“These results are of particular interest for solar wind formation. It indicates that the leading ideas for how to model the formation of the solar wind are not complete, and so our ability to predict and defend against space weather can be improved,” said Boe.

The team is already planning their next eclipse expeditions, with the next one slated for South America in December of this year.

The results are published in the June 3rd issue of the Astrophysical Journal, and are also available in preprint form on ArXiv.