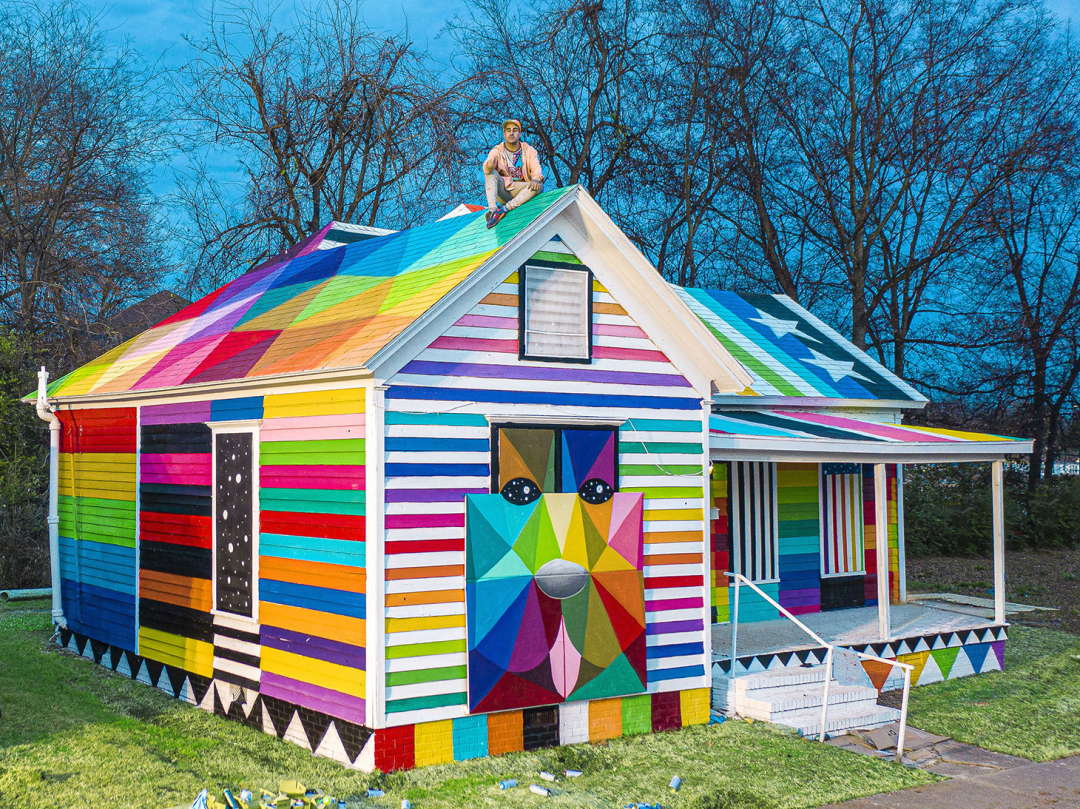 Among the rolling green hills and grey-brown trees in winter, a rainbow of colors and patterns cropped up in Fort Smith, Arkansas. As part of a collaboration between Spanish street artist Okuda San Miguel, global creative house Justkids and 64.6 Downtown, a nonprofit focused on revitalizing the area, an uninhabited house received a fresh makeover into a “Rainbow Embassy,” welcoming visitors far and wide to the neighborhood.

It’s a house that looks like no other on its block. Its roof is a multi-color showcase of shapes, the walls lined with bright hues that play off each other like a study in contrasts: warm tones against blue, black opposite white. Other times, the colors seem to play against each other like wavy lines. In other spots, they are arranged in an orderly fashion from red to purple. Different angles shift the patterns and shapes, different perspectives reveal yet even more details and colors. Look closer on some of the sides of the buildings and you can spot the friendly eyes of an animal peeking out from the design.

“This project gave me the possibility to expand on my previous work, adding more architectonic dimension and completing my vision of mythical animals,” San Miguel told Designboom. This latest installation is part of Unexpected, an on-going project that kicked off last year to bring immersive public art experiences to Arkansas like another recent work, Walala’s Pump & Go, which remade a closed-up gas station into an arts destination. It shares the same name with Fort Smith’s art festival that previously brought larger-than-life murals to feed mills.

This is San Miguel’s second collaboration with Justkids in the area after his 2016 work that revitalized an abandoned house into a brightly themed chapel. The Madrid-based street artist specializes in creating geometric designs with many colors, an eye-catching signature when reimagining old houses in Arkansas or a century-old church in his native Spain. Recently, he also designed almost every aspect of the latest Elrow event, calling the multi-colored extravaganza Kaos Garden. Justkids has previously collaborated with artists in other cities like New Dehli and Las Vegas. 64.6 Downtown focuses its efforts on space-making through activities and events like this creative public work.