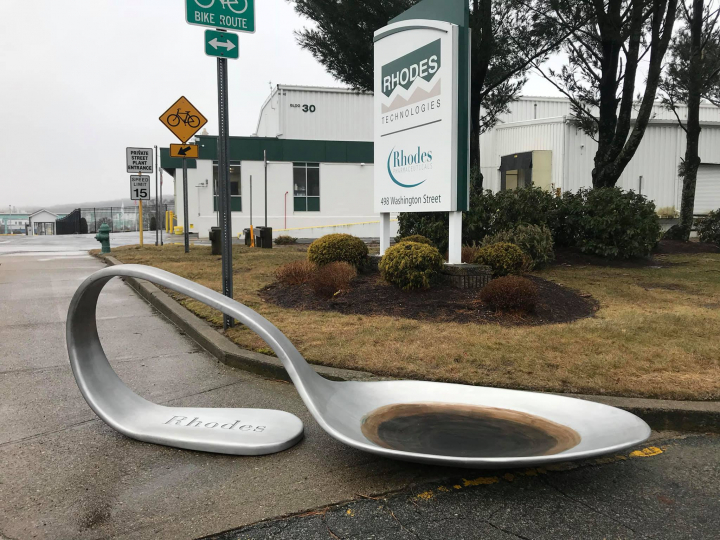 On September 9 of last year, the Financial Times revealed that the Sackler family owns Rhodes Pharma, a lesser-known drug company in Rhode Island that produces generic opioids like oxycodone, morphine, and hydrocodone. Rhodes Pharma was established in 2007, just four months after Purdue pleaded guilty to criminal charges that it had mismarketed OxyContin. Between the two companies, the Sacklers are responsible for manufacturing 6% of opioid prescriptions nationwide and are the seventh-largest opioid makers by market share.

Esposito’s passion for drug advocacy is rooted in a painful experience with a brother suffering from drug addiction — a reality shared by millions of American families. In a personal essay about his motivations, Esposito calls the opioid spoon “dark and macabre symbol of hopelessness.”

“The burnt spoon sculpture (Purdue) embodies the pain I have felt dealing with substance use disorder in my family,” he continues. “The road to recovery is long, tedious and at times full of despair; and like so many families in a similar position it is a road not well understood. Many people do not even realize that opioid addiction is a disease.”

Esposito calls art a “great way” to translate the message of the opioid crisis’s impact. “We’re so accustomed now to grab onto memes and simple visuals, and it creates this response, this emotion,” he told Hyperallergic in a phone interview.

Esposito carries out these “Opioid Spoon Deployments” as part of a larger non-for-profit organization, The Opioid Spoon Project, which is dedicated to rectifying irresponsible drug prescription practices that often lead to the use of non-prescription drugs. (80% of heroin users were first prescription opioid users, according to the National Institute of Drug Abuse.) The project says its goal is exposing “every aspect of how the opioid epidemic was a well thought out business plan by those who sought to seek profit” — a criticism often aimed at the Sackler family, whose financial ties span museums across the United States and Europe.

However, the artist told Hyperallergic that this is “not just a campaign to expose the Sacklers.” He explains, “We’re going to continue to expose the web of influence that Big Pharma has had on this society, and expose the truth.”

“We can’t trust Big Pharma to do the right thing,” Esposito continues. “We really need to set an example.”

This weekend, on Saturday, February 8, drug advocacy group Sackler PAIN — spearheaded by renowned photographer Nan Goldin — will gather at the steps of the Metropolitan Museum of Art. Sackler PAIN has, since 2017, actively opposed the Sackler family’s wide-ranging financial stakes in the arts.