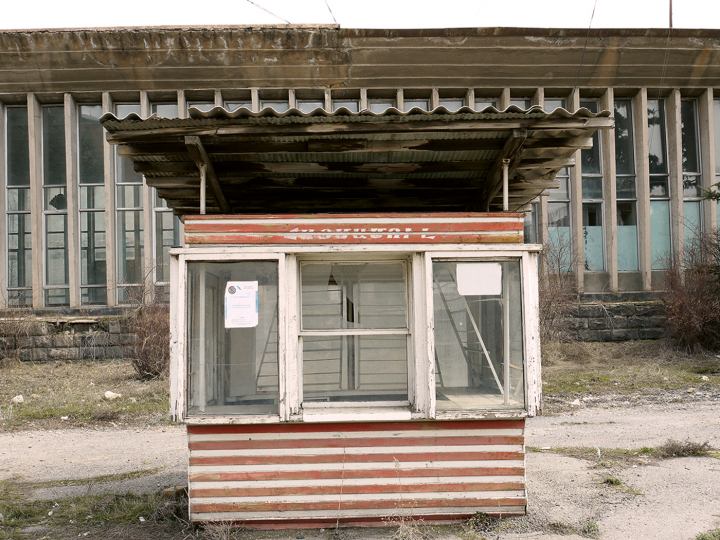 The images presented in Yerevan 1996/1997 (2019, MACK Books) are superimposed over a reproduction of an Armenian school workbook. The book replicates a photographic “sketchbook” made by the artist, Ursula Schulz-Dornburg, addressed to her daughter, Julia. As the title suggests, the images capture the environs, architecture, and inhabitants of Yerevan, Armenia’s capital and largest city. Throughout her career, Schulz-Dornburg has documented places off the beaten path, cultural centers in transition, and man-made spaces caught up in shifting geopolitics.

Because the workbook that contains these images of her walks through Yerevan — particularly the city’s “Bangladesh” district — was assembled for Julia, Schulz-Dornburg focused largely on structures and architectural details that she imagined would delight her daughter, who was studying architecture in Barcelona at the time. For fans of the unique hive-like aesthetic of Soviet-style high-rise architecture, Yerevan is like a box of visual chocolates — a series of discrete little treats tucked into the wrapping of the workbook. In addition to Yerevan’s concrete hive high-rises, there are detailed wrought iron works, beguiling sheet-metal structures that stand in forested areas, and even the occasional hand-painted billboard.

Yerevan 1996/1997 exemplifies of the power of art as a communication tool, and the power of the physical art object. The images would not be so compelling assembled digitally, or even within a different kind of art book. The faithful replication of the original workbook and slightly offset placement of images against this background matrix captures the spontaneous nature of tucking loose prints between book pages.

Concrete as it may be in object and subject, Schulz-Dornburg manages to capture the feeling of unfettered movement through space, as she notes in her letter to Julia on the last page (the only text accompanying the images):

I used a compact Ixus camera and its tiny film was just right to quickly capture this and that of the architecture while walking around — so liberating compared to my normal work with a Hasselblad and tripod.

From the images and accompanying letter, it seems that the most important thing Schulz-Dornburg carries with her as she wanders the world in search of new wonders, is not this camera or that, but the thought of her daughter. For those of us who exist to create art in conversation with life, the idea of an object that memorializes our journey with an imagined companion is sweet and poignant. More than a map of place, Yerevan 1996/1997 is an atlas for the misty terrain of affection.

Yerevan 1996/1997 by Ursula Schulz-Dornburg (2019) is published by MACK Books and is available from Amazon and other online retailers.