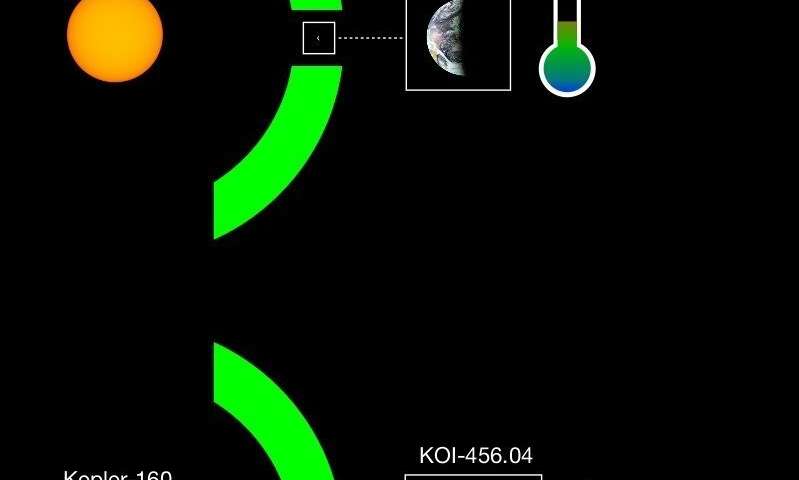 Distant worlds: typical exoplanets orbiting around a sun-like star are about the size

Among the more than 4,000 known exoplanets, KOI-456.04 is something special: less than twice the size of Earth, it orbits a sun-like star. And it does so with a star-planet distance that could permit planetary surface temperatures conducive to life. The object was discovered by a team led by the Max Planck Institute for Solar System Research in Göttingen. Its host star, called Kepler-160, actually emits visible light; the central stars of almost all other exoplanets, on the other hand, emit infrared radiation, are smaller and fainter than the sun and therefore belong to the class of red dwarf stars.

Space telescopes such as CoRoT, Kepler, and TESS have allowed scientists the discovery of about 4000 extrasolar planets (planets around distant stars) within the past 14 years. Most of these planets are the size of the gas giant planet Neptune, about four times the size of the Earth, and in relatively close orbits around their respective host stars. But scientists have also discovered some exoplanets as small as the Earth that could potentially be rocky. And a handful of these small planets are also at the right distance to their host star to potentially have moderate surface temperatures for the presence of liquid surface water—the essential ingredient for life on Earth. “The full picture of habitability, however, involves a look at the qualities of the star too,” explains MPS scientist and lead author of the new study Dr. René Heller. So far, almost all exoplanets less than twice the size of Earth that have a potential for clement surface temperatures are in orbit around a red dwarf.

Red dwarf stars are known for their extremely long lifetimes. Life on an exoplanet in orbit around an old red dwarf star could potentially have had twice as much time than life on Earth to form and evolve. But the radiation from a red dwarf star is mostly infrared rather than visible light as we know it. Many red dwarfs are also notorious for emitting high-energy flares and for frying their planets, which would later become habitable, with enhanced stellar luminosities as long as these stars are young. Moreover, their faintness requires any habitable planet to be so close to the star that the stellar gravity starts to deform the planet substantially. The resulting tidal heating in the planet could trigger fatal global volcanism. All things combined, the habitability of planets around red dwarf stars is heavily debated in the scientific community.

In their new research article, the team of scientists from MPS, the Sonneberg Observatory, the University of Göttingen, the University of California in Santa Cruz, and from NASA now reports the discovery of a planet candidate less than twice the size of the Earth and with moderate illumination from a sun-like star. At a distance of just over 3000 lightyears from the solar system, the star Kepler-160 was located in the field of view of the Kepler primary mission and was continuously observed from 2009 to 2013. Its radius of 1.1 solar radii, its surface temperature of 5200 degrees Celsius (300 degrees less than the sun), and its very sun-like stellar luminosity make it an astrophysical portrayal of our own parent star.

Kepler-160 has been known for about six years to be a host star of two exoplanets, called Kepler-160b and Kepler-160c. Both of these planets are substantially bigger than Earth and in relatively close orbits around their star. Their surface temperatures would certainly make them hotter than a baking oven and everything but hospitable for life as we know it. But tiny variations in the orbital period of planet Kepler-160c gave scientists a signature of a third planet that had yet to be confirmed.

The team of German and U.S. American scientists now returned to the archival Kepler data of Kepler-160 to search for additional planets around that star and to verify the planetary origin of the perturber of the orbit of Kepler-160c. Heller and his colleagues had previously been successful in finding a total of 18 exoplanets in old Kepler data.

When searching for exoplanets, scientists usually look for repeating brightness variations of stars. These temporary dimmings, usually just one percent or less of the apparent stellar brightness, can be caused by planets transiting the disks of their host stars as seen from Earth. The key idea of Michael Hippke, co-author of the new work, and Heller was to use a detailed physical model of the stellar brightness variation instead of searching for a step-like jump-to-dimming and then jump-back-to-normal brightness pattern in stellar light curves. This box-like approximation used to be the standard search technique for almost two decades. “Our improvement is particularly important in the search for small, Earth-sized planets,” Heller explains. “The planetary signal is so faint that it’s almost entirely hidden in the noise of the data. Our new search mask is slightly better in separating a true exoplanetary signal from the noise in the critical cases,” Heller adds.

Their new search algorithm was crucial for the discovery of the new transiting planet candidate KOI-456.04. “Our analysis suggests that Kepler-160 is orbited not by two but by a total of four planets,” Heller summarizes the new study. One of the two planets that Heller and his colleagues found is Kepler-160d, the previously suspected planet responsible for the distorted orbit of Kepler-160c. Kepler-160d does not show any transits in the light curve of the star and so it has been confirmed indirectly. The other planet, formally a planet candidate, is KOI-456.04, probably a transiting planet with a radius of 1.9 Earth radii and an orbital period of 378 days. Given its sun-like host star, the very Earth-like orbital period results in a very Earth-like insolation from the star—both in terms of the amount of the light received and in terms of the light color. Light from Kepler-160 is visible light very much like sunlight. All things considered, KOI-456.04 sits in a region of the stellar habitable zone—the distance range around a star admitting liquid surface water on an Earth-like planet—that is comparable to the Earth’s position around the sun.

“KOI-456.01 is relatively large compared to many other planets that are considered potentially habitable. But it’s the combination of this less-than-double the size of the Earth planet and its solar type host star that make it so special and familiar,” Heller clarifies. As a consequence, the surface conditions on KOI-456.04 could be similar to those known on Earth, provided its atmosphere is not too massive and non-Earth-like. The amount of light received from its host star is about 93 percent of the sunlight received on Earth. If KOI-456.04 has a mostly inert atmosphere with a mild Earth-like greenhouse effect, then its surface temperature would be +5 degrees Celsius on average, which is about ten degrees lower than the Earth’s mean global temperature.

It cannot currently be ruled out completely that KOI-456.04 is in fact a statistical fluke or a systematic measurement error instead of a genuine planet. The team estimates the chances of a planetary nature of KOI-456.04 to be about 85% pro planet. Obtaining a formal planetary status requires 99%. While some of the Earth’s most powerful ground-based telescopes might be able to validate this candidate with observations of one of its upcoming transits, there is also a good chance that the PLATO space mission of ESA will be capable of a confirmation. PLATO is scheduled for launch in 2026 and one of its major science goals is the discovery of Earth-sized planets around sun-like stars. The MPS is currently building the PLATO Data Center and deeply involved in the PLATO mission. If PLATO will be oriented in such a way as to re-observe the field of view of the Kepler primary mission, then KOI-456.04 will have a chance of being confirmed and studied in even more detail with PLATO.

Next post Consciousness: how can I experience things that aren’t ‘real’?
Close
Menu
Social profiles