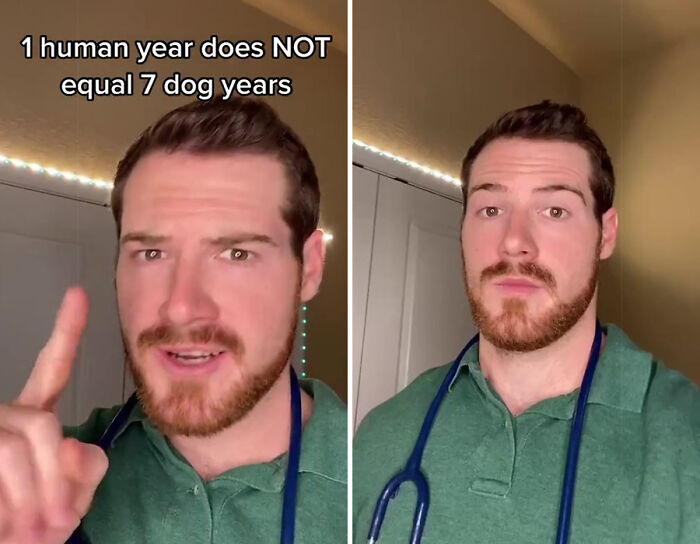 Pets are an endless source of joy and comfort for many. Some find taking care of a small critter fulfilling, others lean towards dogs that they can be active with, and then there are those who like cats and their general independence. Basically, there’s a pet for every type of personality, and people are largely thankful for the companionship, reciprocating the unconditional love with dedicated care.

And it will likely surprise no one that one of the most popular pets around the globe is a dog! These pets can accompany you for majority of your life; they can watch you grow up just as much as you document their journey. Dogs often become full-fledged members of the family, so their birthdays become as much of a milestone as your own. But here’s the hard truth—their cake day holds more significance than many imagine.

A video went viral on TikTok, made by veterinarian Dr. Hunter Finn. It was viewed 4.2m times and unfortunately, it’s not about dog petting techniques. “Okay, so you know that one saying that one human year equals seven dog years?” said Dr. Finn. “It’s not true.” Dr. Finn informed people that the largely prevalent idea that dogs age according to the formula of 1 human year=7 dog years is actually wrong. In fact, 1 human year means your dog has aged to the equivalent of 31 human years!

A 1-year-old dog equals 31 years in human years, but the aging scales down with time

While the 1=31 might seem scary, there’s no need to panic (much)! “A 1-year-old dog equals a 31-year-old human,” the veterinarian continued. “And a 2-year-old dog is 49.” So we can rejoice that a 2-year-old doggie is not secretly a 62-year-old. In fact, a 7-year-old dog is equal to 62 years in age, and an 8-year-old dog is 64. The aging slows down with years, which can provide some relief to dog owners. This calculation might be a blow to some people, especially with senior dogs in the families, but information such as this serves a very important purpose—education.

When you know the dog’s age, you can act accordingly and take care of it better

Think of it like this—the older you are, the more closely you have to monitor your health. When you could climb a tree in a minute when you were 10, at the age of 40, you might find yourself struggling. Over time, the body becomes less nimble and there is a plethora of other problems. It’s exactly the same for your dog! If the pooch is nearing his 5th birthday, his health is closer to that of a 50-year-old man, so it’s likely he needs more monitoring and frequent checkups.

The new calculations have a scientific study behind them

Researchers at University of California San Diego School of Medicine released a study that focuses on a method for determining the age of a cell, tissue, or organism. The created formula is transferrable across species and shows that dogs mature and age quite rapidly during their first years, reaching human-based maturity in less than a year. “This makes sense when you think about it—after all, a nine-month-old dog can have puppies, so we already knew that the 1:7 ratio wasn’t an accurate measure of age,” said senior author Trey Ideker.

Naturally, people online were both amazed and concerned by the news