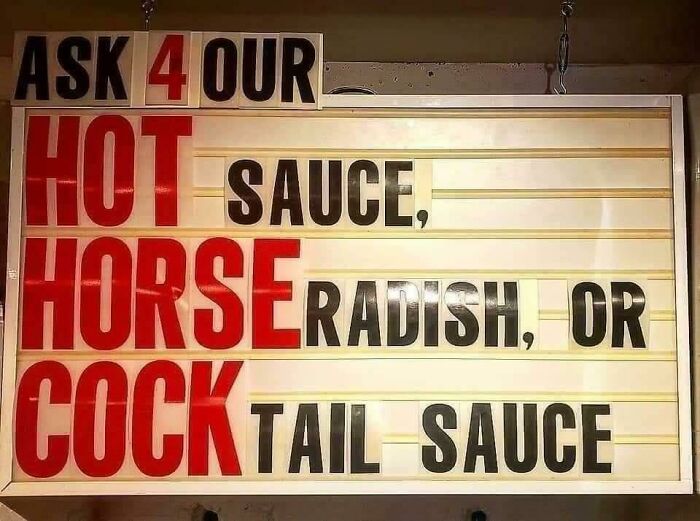 A guilty pleasure some of us have (and, we hope, some of you do, too) is reading through the entire menu at a restaurant or cafe, looking for odd slips, grammar mistakes, and hilarious Photoshop fails. You know, for r-research purposes of course (that was a lie, we enjoy feeling superior and poking fun at bsaic grremar mstakess and anyone who thinks that Photoshop is an actual store).

Some menus, however, are so incredibly bad, so magnificently funny that people couldn’t help but take a picture and share it online for everyone to shame! Shame! Shame! The Photoshop and grammar-loving team at Bored Panda has collected this list of the most egregious menu fails to raise your mood, so have a scroll through and upvote the best of the worst.

And remember, folks, to paraphrase our glorious culinary leader Gordon Ramsay, if the menu has pictures in it, it’s time to start panicking!

Bored Panda talked about editing, proofreading, and kerning (aka the spacing between letters) issues in restaurant menus with Lisa McLendon, the News and Information Track Chair at the University of Kansas and the Bremner Editing Center Coordinator. Read on for her insights and, if you happen to be working on a menu right now, her advice on how to best present the text so its readable, clear, and doesn’t cause embarrassing misunderstandings.

#2 The Sushi Restaurant, That I Went To, Accidentally Put A Picture Of USB Sushi On Their Menu

#3 The Peas Are Upside Down

“Word placement, typeface, and kerning are crucial for effective, professional-looking logos and layouts,” McLendon from the University of Kansas said. “If it’s just a few words, all-caps is fine, but it’s harder for people to read longer blocks of text in all caps. It’s also harder for people to read italic or highly stylized type, or type along a curve instead of a line.”

She explained to Bored Panda that if you’re working with words that are stacked or circled, you ought to look for all the various ways in which they could be misread or read out of order. “Make sure the starting point for readers is as clear as it can be,” she said.

Meanwhile, if the kerning is too tight, the letters could run together and create some incredibly embarrassing misreadings. (Side-note: remember that if you ever write the word ‘flickering’ in capitals and don’t want things to get out of hand fast.)

#4 This Seductive Duck I Found On A Menu In Vietnam, Complete With An Excellent Typo

McLendon said that, in her opinion, we should all give the people working on restaurant menus a break. “Especially if they’re not native speakers because their job is food, not language,” she said about those employees who are asked to work on the menus because of budgeting issues.

“That said, a particularly awful or amusing typo can make a business go viral in a negative way—not something any business wants. The easiest thing is obvious, but many people forget to do it: run a spell-check. Spell-check will catch any typo that is a misspelling (most typos on restaurant menus are). But spell-check won’t catch typos that result in a word that is still a word, just not the word you want.”

The solution? McLendon suggests having someone else proofread the menu text before sending it off for printing. “Some printing companies provide this service, plus there are freelance editors who do proofreading, and I’ve also heard of small businesses swapping services for work like proofreading.”

#8 My Friend Is In Florence, Italy And This Restaurant He’s At Has An Assassins Creed Screenshot As Their Menu Background

#9 This “Plane” On My Airline Menu

Menus with pictures in them generally indicate that the place you’re eating at is a little bit on the cheap side. (If they’re laminated, get out of there, quick! Gordon Ramsay has a point, after all.)

Now, there’s nothing wrong with eating cheap food once in a while—who doesn’t enjoy a cheeky curry or a guilt-free kebab in the middle of the night when we’re peckish? But there’s something to be said for glancing a bit deeper into unchanging menus with low-quality pictures in them.

#12 This Picture Isn’t Blurry, That’s How The Menu Looks

However you might want to slice things (pun not intended), menus with pictures indicate that the owners of your chosen eatery aren’t investing a lot of money into the business, the staff, or the food. While this isn’t an automatic death sentence (plenty of businesses care about their employees, though, then again, plenty also don’t), it does mean that the quality of the food might be low.

Frozen, canned, and processed food is the norm. And if saving’s the main goal, you can bet your bottom dollar that leftovers will be reheated in microwaves and brought to you as though it was all fresh.

#14 Anyone Want Some Thai Food?

#15 Top-Notch Photoshop On This Greek Menu

Meanwhile, if the staff aren’t paid enough or motivated in some other way to act professionally, hygiene standards can drop. This can mean that the weirdly-photoshopped burger meal you’re laughing your head off at while flipping through the menu is an indication of low standards and nasty things crawling all over the kitchen.

What’s more, even if by some miracle the pics in the menu look terrific, there lies another problem: what you see and what you’re bound to get can be two completely different things. That’s why, personally, we’re in favor of small menus that only have words on them. If in doubt, you can always ask your server about each meal and they’ll be glad to tell you all about them.

#17 The Peas On This Menu Photo Are Photoshopped In

#20 I Honestly Don’t Know What To Look At

#21 This Restaurant Wraps Their Menu Around A Wooden Stick. There Was Absolutely No Explanation Or Purpose To It

Small and clear menus don’t mean simple and boring! If it’s readable, approachable, and user-friendly, your clients are more likely to get to the meat of things (literally, if they’re not vegan) and leave a healthy-sized tip.

#22 Got Those Drinks On The Menu, Boss

#23 The Motherlode Of The 90s Nightmares

#29 This Salad Section On The Menu At The Pub

Which menu fail was your favorite and why, dear Pandas? Why do you think so many menus out there have such basic mistakes? Do you think that menus with pictures automatically mean bad food? What’s the worst menu you’ve personally encountered when you could eat in, not just take food to go? We can’t wait to read what you think in the comment section!