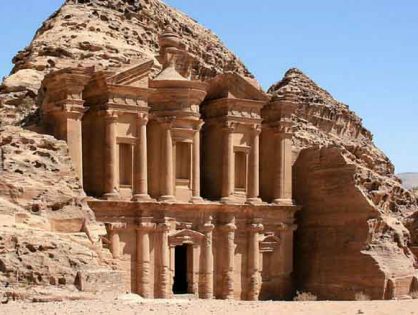 The Olmec culture blossomed in Mexico from 1200-400 BC and is considered to be the descendant of the Maya and the Aztec societies. The exact reasons that led to the deterioration of this great civilization are unknown, as this happened two thousand years before the first Europeans arrived into the region.

The Nabateans, widely known as the civilization that built the city of Petra, created an advanced society that resided in parts of Jordan, Canaan and Arabia. They lived there from around the sixth century BC. Although nobody knows why the Nabateans abandoned Petra during the fourth century AD, archeologists have found evidence this was well-organized and planned. It probably happened in order to have better access to trade routes they relied on, which moved north.

One of the greatest ancient civilizations of southern Arabia known as the kingdom of Aksum thrived during the 3rd – 6th century CE. This fast growing trading empire even dominated the market of northeastern Africa. However, in the end of the 6th century, the Persian invasion in South Arabia caused the decline of the Aksumite culture.

Influenced by the Minoan civilization, the Mycenaean merged around 1600 BC in southern Greece. They were a dominant naval power as well as skillful traders. The possible reasons that caused their decline were either social unrest, destructive earthquakes or the invasion of a civilization coming from the north.

The Khmer Empire dominated Southeast Asia from the 9th century AD. It is known worldwide as the civilization that built Angkor, the capital city of Cambodia. Several factors have caused the fall of the Khmer Empire in the late 14th to early 15th centuries. Some of them are land overexploitation, prolonged droughts or war.

This culture thrived in Romania, Ukraine and Russia between 5500 BC and 2750 BC and is known for building the largest Neolithic settlements in Europe. Theories about their decline include an attack by the Kurgan culture and one of the worst droughts in Europe.

The Clovis were the first human inhabitants of the New World. This prehistoric Native American culture resided in North America and dates back to 10,000 BC. There are several theories about their decline such as a comet that crashed to the Earth and the lack of food source.

The first known civilization in Europe, the Minoans, inhabited Crete from 3000 to 1000 BC. Their culture focused on social organization, art and commerce. It is believed that their disappearance was caused by a volcanic eruption on the island of Thera (Santorini) or by the Mycenaean invasion.

This Native American culture resided in the United States around 1200 BC. In1300 AD they abandoned their houses and scattered. According to researchers, social and political factors such as a violent conflict led to their fall.

This culture thrived in Pakistan and western India from 3300 to 1300 BC. They built over one hundred well-organized towns and villages. There are several theories about the reasons of their decline, including environmental changes and the Aryan invasion around 1500 BC.

I am a History major, who loves art, travelling and nature. Photography and music make my life exciting. I love learning new languages and cultures. Over the past 5 years, I have been working as a translator and writer.